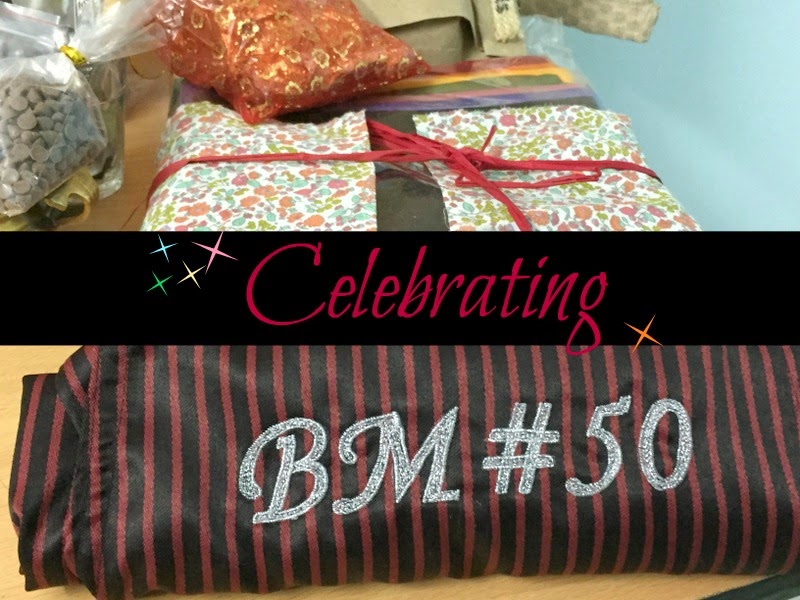 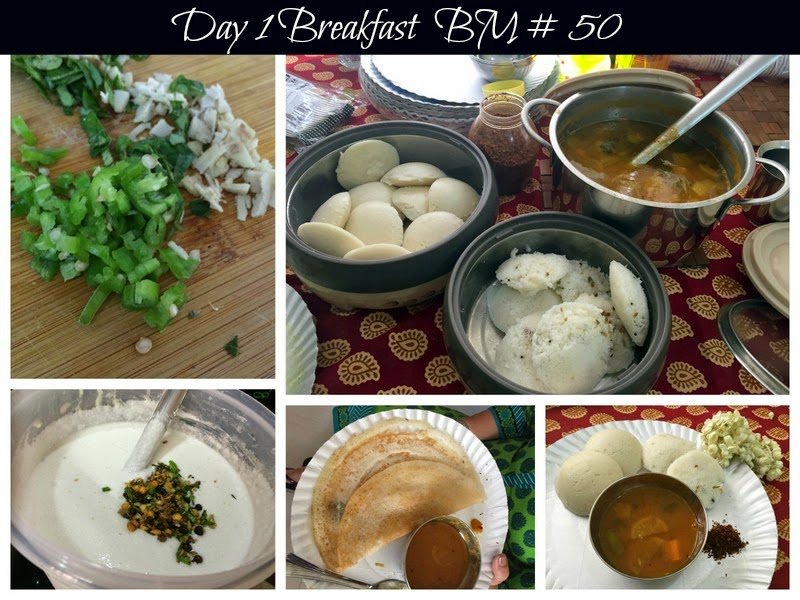 Friends started coming in by 9.30
Lot of commotion as all come in.
Meantime preps for lunch in process.
Drinks being made by Kamallika. 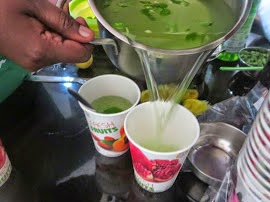 The lunch Menu
Korma with idlis by Padma
Chaawal ki Bhaakri with Zunka and Thecha by Pradnya.
The thecha was made in mortar and pestle and Kalyani did the hard work.
Fresh green garlic rice with fresh green peas by me.
Cucumber raita by mixed hands.
Ginnu by Archana
The meal that was prepared was as good as a demo  for me as I was very keen on learning the chaawal ki baakhri and the kaanjeeveram idlis .
Frankly speaking I did not bother to see how the dessert was made, and truly repented, it had turned out awesome. 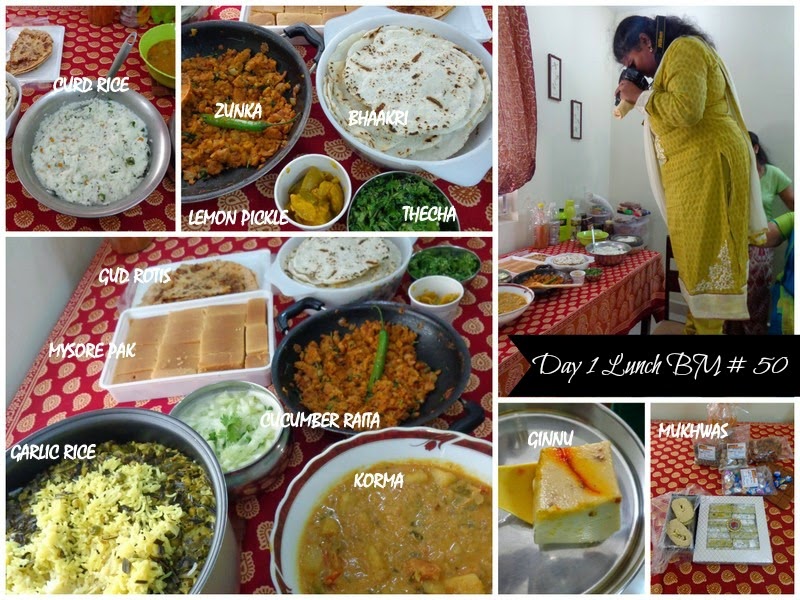 Next a display of the variety of bananas available in Chennai, thanks to Veena, who got a huge pack of these , Nandini sweetly labelled them all. The Chennaites giggled away, amused that I had no clue about this variety…wonder if it was my ignorance or their mischief which made them giggle.

Celebration Time begins!!
We have birthdays of two members in this month, one had already passed by, the other was yet to come!!
Happy Brthday Kalyani!
Happy Birthday Valli ! 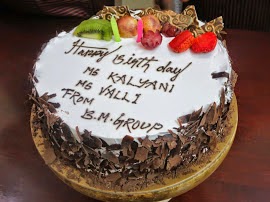 Time for the BM photo shoot!!
Dress code – white with the BM # 50 aprons , yes the aprons were designed by me, and I want to make for BM # 75 too, but of course hope to make many many more..which means we want more participants . Are you girls listening? Get ready, time will fly off. 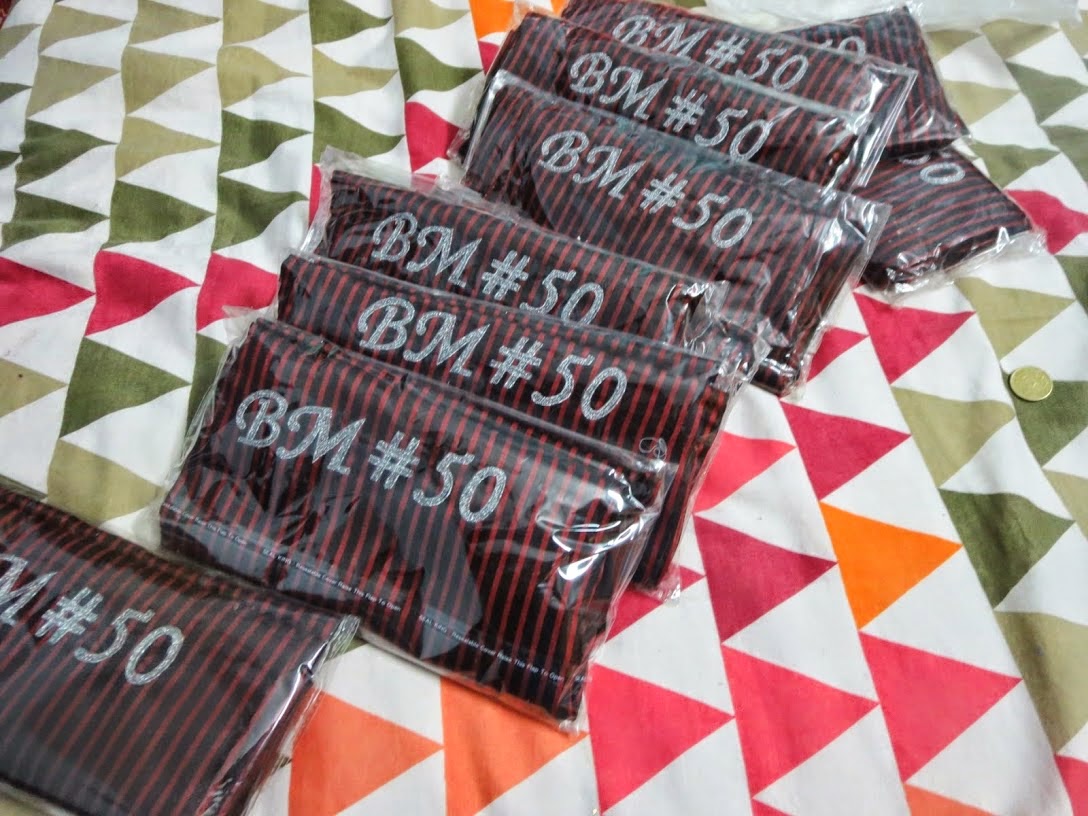 A photography class by Usha.
It was interesting to see how she had placed the luggage bags as reflectors.
She had saved some korma from the lunch menu and showed us how to click. 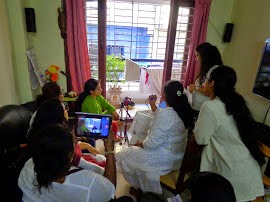 Time to get dressed in a traditional attire.
All in beautiful saris, adorned in beautiful jewelry and of course how could we miss the flowers in the hair.
All dressed we wanted to give a toast to the BM , and could anything be better than some shots! Hey wait…these were non alcoholic pani puri shots , which really hit all of us, since they were dead spicy!! 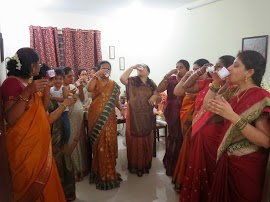 It was about time we all headed for the beautiful traditional dinner arranged by PJ at Anna Laksmi.

Since Valli sat next to me she kept guiding me on the details of the meals served.
All I know is that it was beyond me to eat that heavy meal, I totally skipped the desserts.
On getting back home it was time to give and receive the goodies. A lot of effort had gone in planning these and all we could hear was Oohs and Ahs! There was a special gift for our host Padma, who blushed like a little girl on receiving it. 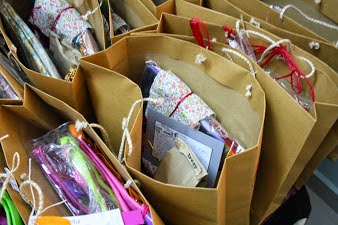 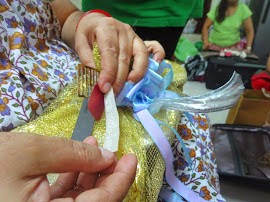 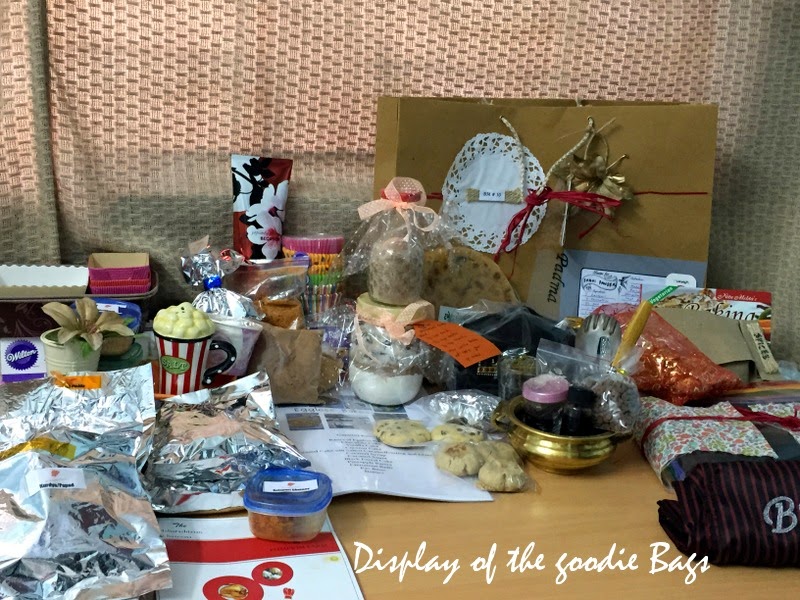 The only concern was to carry the gifts back, but guess a solution comes up automatically !
It was time to sleep, but the girls wanted some mid night fun and we had little Ishku entertaining us and Nandini giving us tips and some briefing
on sour dough.
A lot more entertainment, with all telling their own stories, a lot of giggling, lot of blushing..finally around 4 we knocked down only to be up by 5 as we had plans to go to the beach. 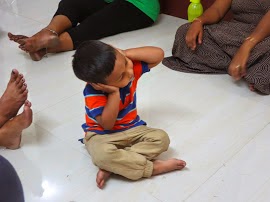 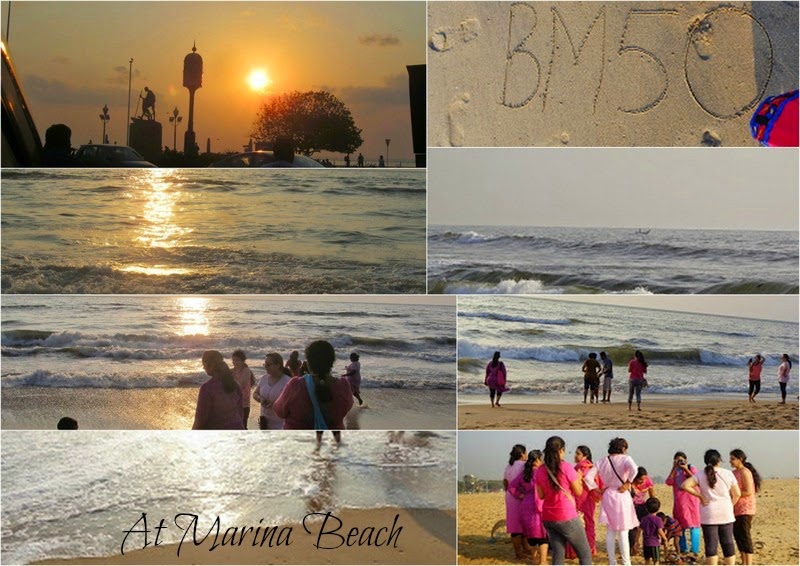 The Beach
Groggy faces, Sleepy eyes, yet everyone had to get up and get ready to leave for the beach.
By the time all got into the cars, everyone’s faces lit up.

A few went into the water, but a few preferred to just to be together and gossip.

Breakfast at woodlands
Since we did not get one big table, all got divided into groups.
Veena , PJ and I shared one
PJ was busy with little Siddhu, and Veena and I caught up.
Once again I felt we shared a strong bond.


After getting home
Dress code Blue
Back into cars
Shopping at Waltax road- bakery products
I really didn’t need anything, just picked a mini cookie cutter set.
Nandini took some of us for prop shopping, which was amazing, Thanks dear!! 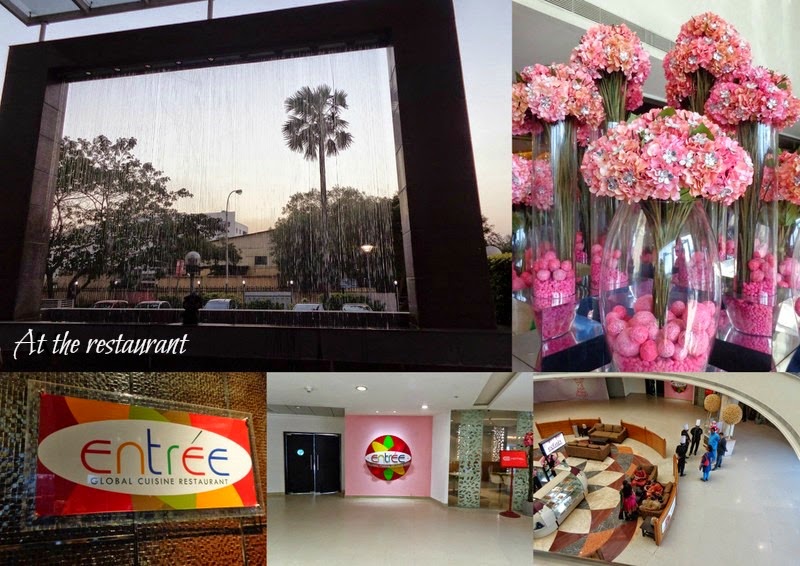 Off for Lunch
Venue E Hotel
Hosts- Padma and her hubby
Menu
It was a buffet and quite elaborate
I just had some Daal with roti…my weak point, as I prefer roti to rice.
I wanted to gorge on the desserts, which were all eggless. 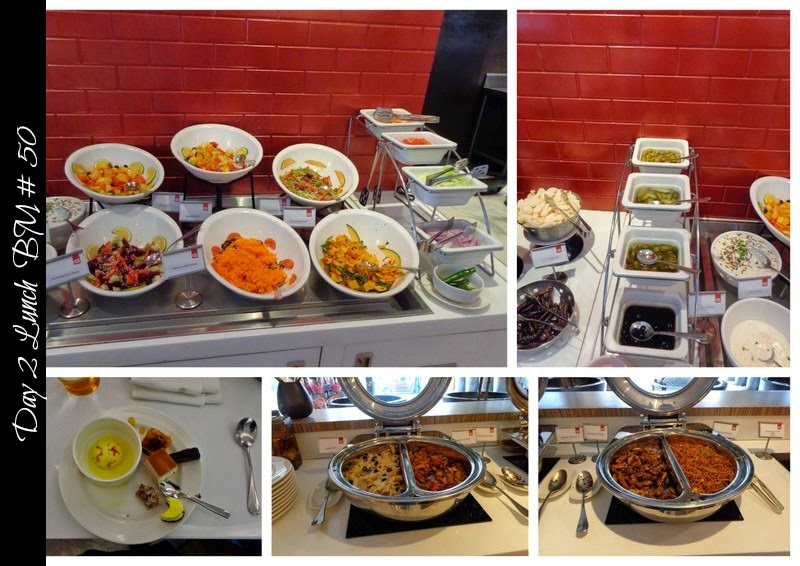 The desserts
Mocha pastry
Brownie
Pineapple mousse
Clusters
Walnut Banana Bread
Gulab Jamun
Rasmalai
Ice cream with various toppings
Time for Usha to leave
The first member was leaving, everyone got emotional.
Welled eyes:(
Next some super demos by the chefs
Chef Balaji
Chef Hari Babu
Adai with drum stick leaves, Keppai Roti as it is called
Steamed rice dumplings, Kara Kozhukattai
In the dessert section
Tiramisu
Chocolate mousse
Toffee filled chocolates
I could just taste with a lick, as the tummies could not accept any more food. 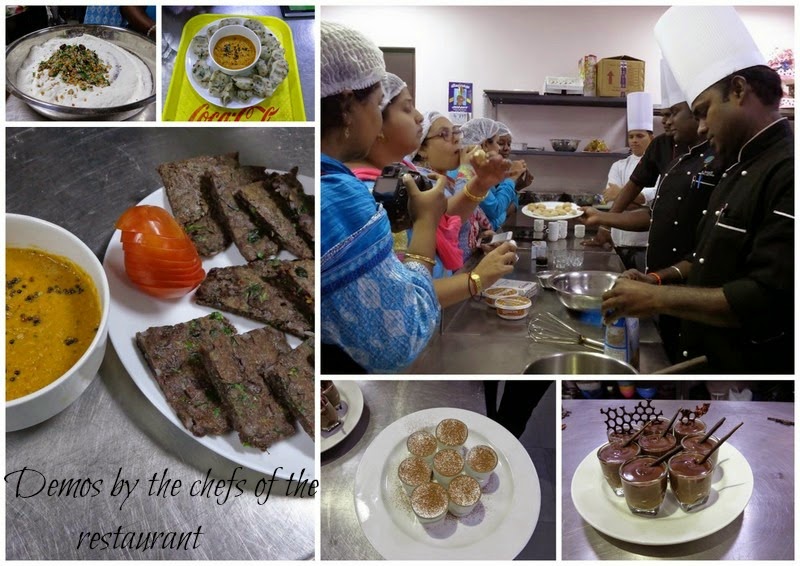 Back home.
Rushing to get ready in Red for the dinner.
The dinner was arranged in a banquet hall.
It had a surprise element, which some how I had guessed, but kept mum.
Ah the Chennai traffic!!
We were late . 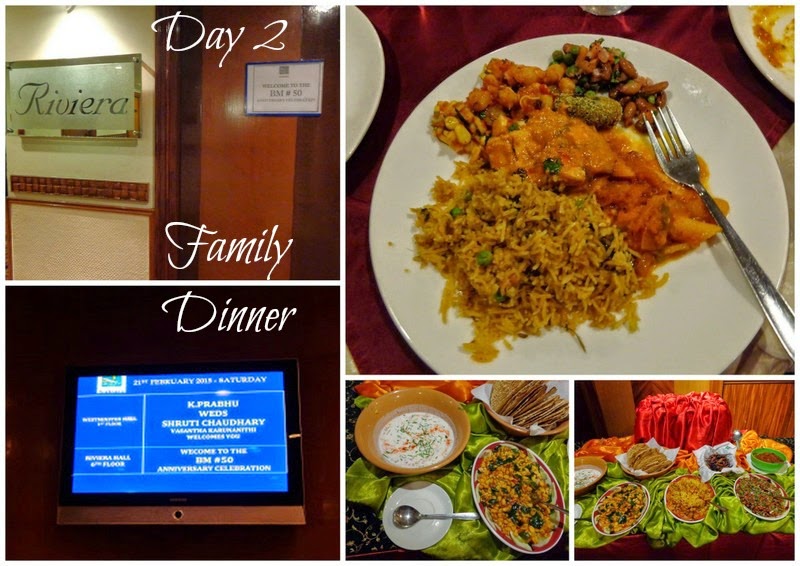 Chennai friends families were there, which was the surprise element.
It was wonderful to meet everyone in person.
I was very keen on meeting Atthama and Amma, (yes Vallis mom and mil, )and take their blessings. I felt I knew them so well as I have been associated with them through Vallis posts.
It was fun meeting the kids , though they were a little shy.
Again the menu was rather elaborate, but by now tummy had reached its saturation point, and I could only taste a few dishes …just by teaspoons.
Once we were back home most of the members conked off, I got busy packing my excess luggage as I had to hand it over to my son in law who was in Chennai for a day.
Finally made to bed around 2ish, only to be up by…..come back and read tomorrow:))
and yes this my Day 2 post under special theme .