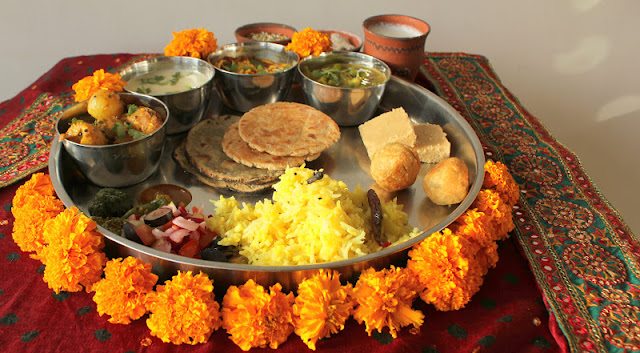 Gujrat lies in the western zone and the cuisine here is more or less divided into four parts.Kaathiwadi,Gujrati ,Surati and.Kacchi..Every district has its own variety and menu but only some are popular….The basic Gujrati thaali remains the same.The everyday food in a Gujju home is Daal-Bhaat-Rotli –Shaak.Tuvar Daal or the Pigeon Pea daal is used extensively  in Gujrati,while Kaathiwadi  ‘s make a different daal everyday.
.Traditionally a  Gujju lady gets up and the first thing after sweeping the front yard keeps a cooker on gas.This cooker has two sections.One would have Daal ,the second one would have rice…Bhaat as they are called here..Once the cooker is done they just have to temper the daal  ,make rotlis.These rotlis are paper thin and smeared with ghee.The vegetables are cooked in a pan with vaghar. All done they serve the second  meal which is called lunch at 11a.m. after which the men go off to work.The first meal…breakfast is tea and some light snacks popularly known as farsaan.This is served around 8a.m.The everyday meal has no frills ,to make it festive additional shaak is served…may be two more shaaks.Farsaans and sweets are added.These too depend on the occassion..sometimes one sweet is eneough.If it is a elaborate spread then two farsaans may be served one fried and one steamed two sweets ,Salad ,papad and chutneys naturally go along. 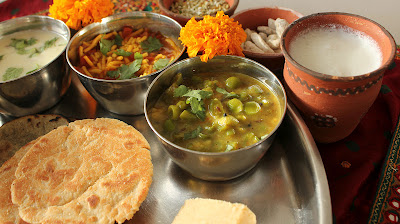 It is very common to add a little sugar or jaggery to the daal,shaak or kadhi.I have been constantly asking my Gujju friends…what if a person is diabetic…the answer is..use a little less sugar…..they just cant eat otherwise.Initially when I came here I just could not eat this food because of the sweet and salty combination,but over the years I have developed taste for it.As yet given the choice between Punjabi and Gujrati my first choice is naturally Punjabi.

There are set  menus in Gujrati kitchens and they are blindly followed.The menu I have picked up today is a Kaathiwadi menu.Kaathiwad is in the south western region of Gujrat .The food here is spicy and the use of red chilly is more..unlike Surati.Surati food is made with lot of green chilly,green garlic and coriander.Jowar  and rice rotis are more popular in Surati cuisine whereas Baajri  Rotlas and Bhaakri is relished by Kaathwadis.

So lets get on to the menu…..
Drink
Chaas
(Light buttermilk spiced with roasted cumin seed pwd) 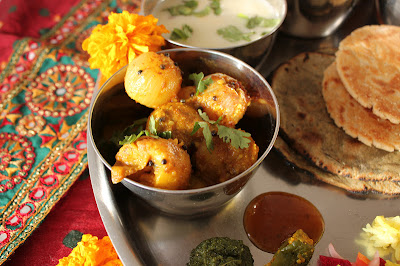 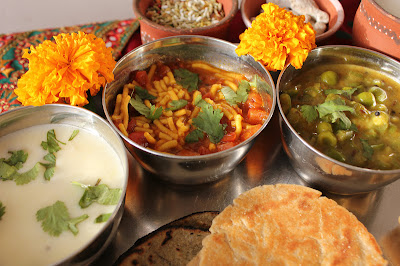 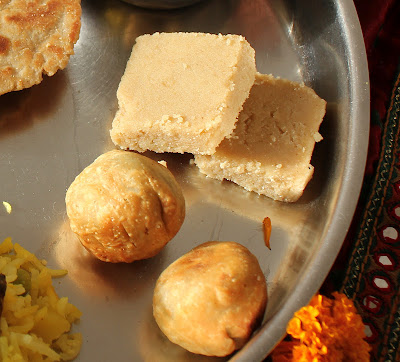 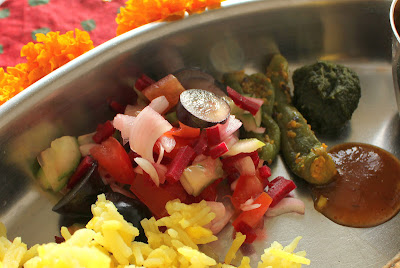 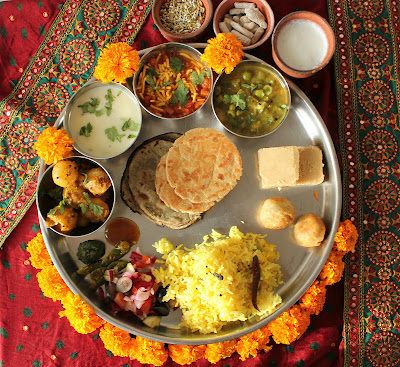 The meal was cooked for the whole family,but the Bhaakris and Rotlas were made only for the shoot..ofcourse later when we sat to have dinner more Bhaakris were made.
Preperation of Thaali…
Sukhdi……………………..1day in advance
this stays good for more than a month so can be preprepared in advance ,though for best results is served right after it is made.
Leelva ne Kachori…..1day in advance
time consuming recipe ,like samosas,but normally Gujratis freeze these kachoris as Leelva danas are available in winters only.
Chutneys…………………1day in advance
Cooking this meal took me about an hour..four burners at one go and the Khichdi goes into the rice cooker.
Check out the Blogging Marathon page for the other Blogging Marathoners doing BM#15
This Thaali goes to Valli’s Thaali Mela 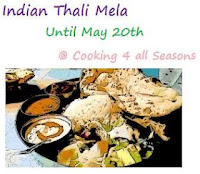