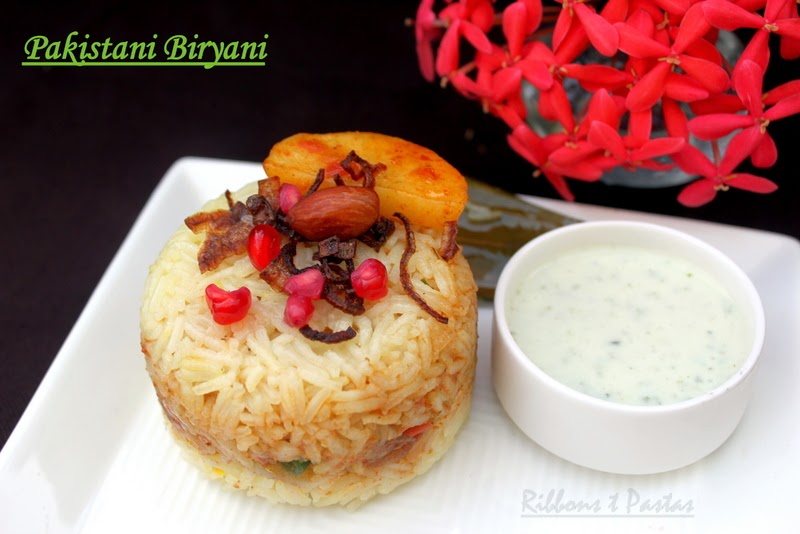 This is my first post for the year 2015 and before I begin A Very Happy New Year to all my friends!!
Coming to the year’s first BM!!
This week I will be making some Biryanis. Biryanis are a mix of rice, whole spices , curried meat or vegetables. Normally they are layered where after a layer of rice a layer of curried vegetables is placed . It is topped with another layer of rice. Nuts , raisins, fried onions, saffron, may be sprinkled. The dish is then sealed and cooked on slow fire or Dum as we call it. Some Biryanis are made without layering, both rice and vegetables or meat are cooked separately , mixed and then put on Dum. Lucknow specializes in this style of Biryanis. While talking of Biryanis how can we miss the famous Hyderabadi  Biryanis.
For today I have picked a Pakistani Biryani. I made this Biryani while my cousins were here from USA. While eating this Biryani my cousin found it to be truly authentic. I wondered how he felt that. He has some Pakistani friends in US and he has had Biryani in their house so perhaps he could say that. I have never tasted a Biryani in a Pakistani house, but I was happy to know that it was authentic. 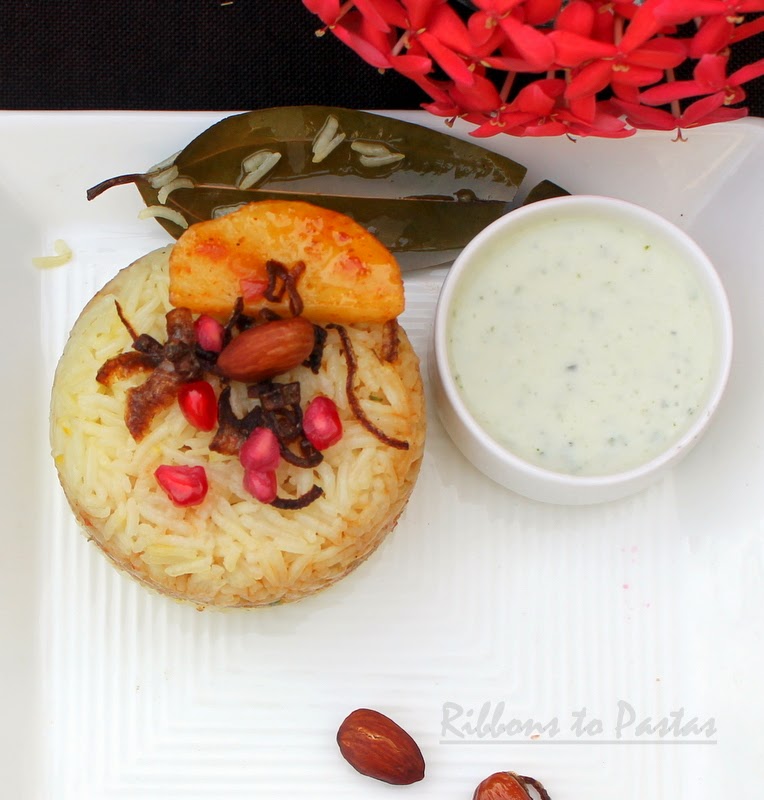 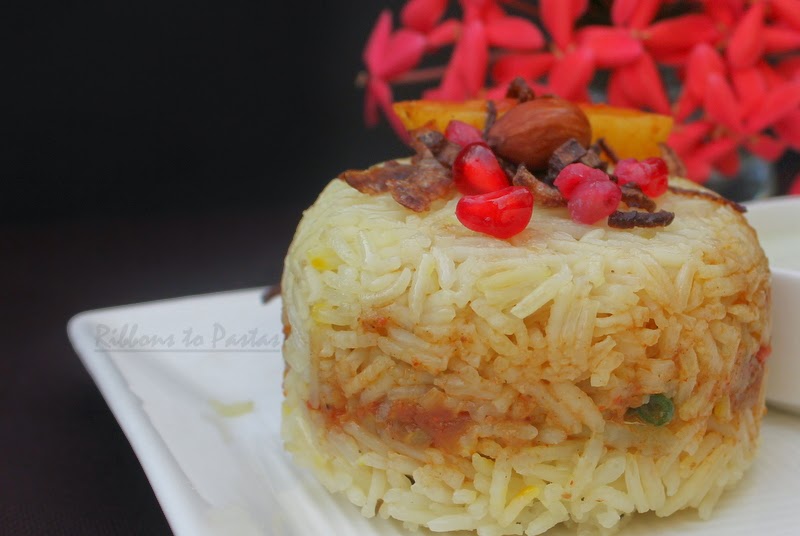 Boil 4 cups water and add mint leaves, salt , turmeric, whole spices and lemon juice.
After a few boils add the rice with 1 tbsp of oil.
Let the rice cook till the moisture has gone simmer and cook till done.
Alternately transfer the rice to a rice cooker and cook rice.
When the rice is done, take it off the flame. Place in one star anise in the center. This releases a soft aroma and flavour to the rice.
Allow the rice to cool completely by spreading it on a tray or a dish.
Once the rice has cooled, add in the saffron (diluted in hot milk) and mix the rice gently. Avoid smashing the grains. 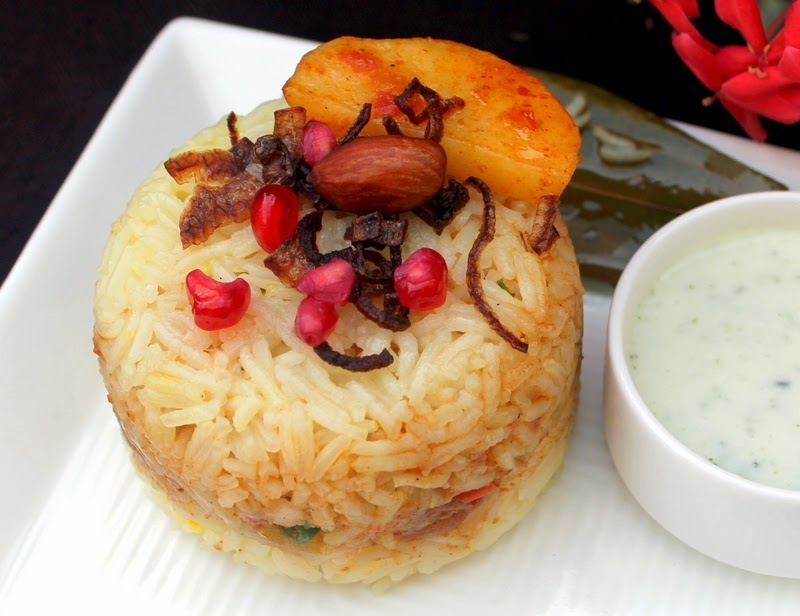 Heat oil.
Add black cumin and allow them to splutter.
Add two sliced onions and saute till dark golden.
Add in the tomatoes and cook till they are tender.
Add in the ginger garlic paste, and saute till oil separates..
Add the powdered spices, along with some salt and all the chopped vegetables. Mix well.
Cover and cook on low heat till vegetables are tender.
Add the yogurt and allow to cook for another ten minutes.
Layering
Grease a baking dish or a pan.
Spread half the rice.
Add in the vegetable masala.
Next spread a layer of rice.
Sprinkle saffron milk.
Garnish with fried onion and nuts.
If using a baking dish , cover with a sheet of foil and bake for 20 minutes at 180 deg.
And if using a pan simmer for 20 minutes making sure all the flavors seep in.
I normally keep a heavy girdle on slow fire and then place my pan on it. This reduces the heat and we get the dum effect that we want.
In a pan, spread half of the vegetable masala. Add half of the rice, topping it with another layer of vegetable biryani masala. Spread another layer of rice on top.
Finally top it with fried onions (or raw onion rings) and Almonds 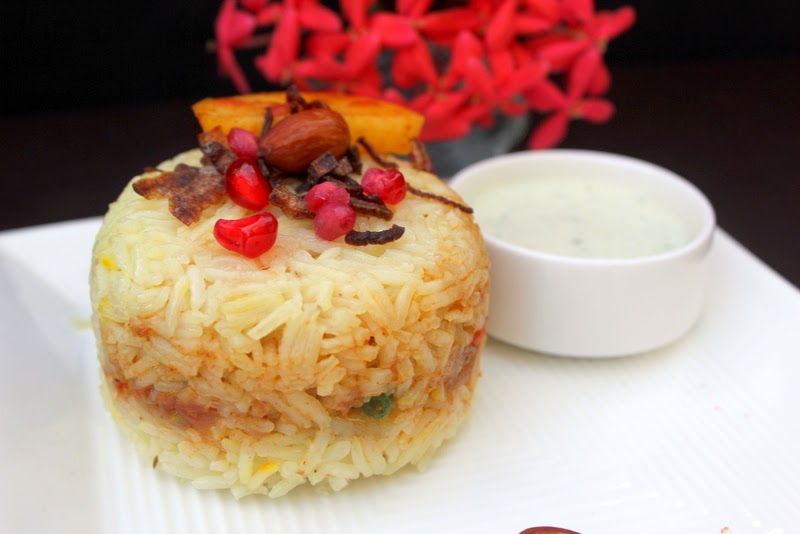