When it comes to occasions and celebrations, I think I could not have picked a better post than our BM Celebrations.This is one life time event, meeting friends whom you have never seen or met. So here is three cheers to BM!!..Hip Hip Hurray!!  Today we are celebrating the second day of the BM Meet visit. For Day 1 details check here.

Day 2 Iteniary
9th Feb
Color code White
7.00 A.M trying to push everyone out from the hotel for river front
7.30 A.M finally at river front…Sabarmati river, has a newly constructed river front .A beautiful serene place, which was filled with echoes of ladies giggling and posing to be clicked. Result? Stares by the passerby’ s.
8.30 A.M drive through the city , on route saw
Seedi sayed ki jaali
Shaking Minarates
Railway station
Fruit Market
and you hear the cameras going click ! click!! click!!..while I sit in the driver’s seat.

The fresh fennel seeds..which made everyone go crazy!!
9.30A.M Gujju breakfast
Menu
Fafda with kadhi and papaya chutney
Khaman
Sandwich dokla
Khandvi
Sev khamani
Jalebi
Nest special…. Vegetable khichdi. This was for the little ones, but they were enjoying the fafdas ! and the grown ups ….they were loving the khichdi..Ain’t that strange?

12.00 noon Demo at cream n crunch, eggless cake shop
Chocolate cigars
Flowers with cream
Chocolate fans
Figures with cake
After the demos we gorged on the orange and truffle pastries. Everyone could have easily gobbled down some more.
Thanks Shimol!

…..break! Time to go for lunch

and we are still in our aprons…..people around thought we were doing a telly show…..

Now the usual plan after a royal lunch….sleep? yes, that is what normally I would do..but let’s see what these ladies did…..?.
4,00 P.M shopping at sanskruti, a shop for Gujju sareess, fabric and a lot more…………….along with some masala chai to get those eyes wide open.
6,00P.M back, only to be ordered to get dressed .
Dress code..Traditional Formal wear
All in  Traditional attire… decked up and looking stunning..with beautiful sarees and jewellery ..not missing the gajras,(flowers), that Padma brought all the way from Chennai…she even got pins to tuck these!..thanks sweetie, that was so thoughtful!!

7.15P.M left for dinner
While driving to the venue , we kept talking and at one point Valli expressed her wish to visit my home, I coolly put it off saying, ” ya , sure. I wondered if the group had got suspicious about the surprise, but it seemed well under cover.
8.00P.M reach the venue
AHHH!!!!!!! AND UHHHHHHHS!!..
Well the venue was my home…and a total surprise for everyone!
Some of the friends who had seen my house on FB immediately said…oh this is Vaishali’s house, while the others were still wondering what was going on.I was really happy to see everyone’s reaction, this was the best part of the BM meet.
What followed next…
Meeting the family
A long round of the house, where all my secrets were revealed!
A tandoori night, where we got the big tandoor from the hotel and relished
Paneer tikka
Mushroom tikka
Aaloo tikka
Cauliflower tikka
Hara bhara  kebab
A photo shoot in traditional attire.
followed by a simple dinner, which was
Daal e maharani
Biryani
Aalto anar raita
Tandoori rotis
And then followed the dessert!

I wanted my friends to taste some of my signature dishes , and this was my chance, all this while they had been eating restaurant food, so I had prepared the  desserts two days in advance.
Gajjar Gulab jamun Terrine
Cassata ice cream
Orange ice cream
Musambi badaam ice cream
The last two were store bought, but these are special ones, because they are made in the traditional way, by churning,
Last but not the least chocolate paan , was served , which is a big hit with my family.

A quick Bajri no rotlo demo  by my staff, who stays next door, followed the paan session, and then it was time to drop all to the hotel.
The day flew away and when I got back into my room , I gave a big hug to my hubby ,thanked him for all the arrangements he had made to welcome my friends.
Smiling I went off to bed!
The mat you see in the picture below is a gift from Valli and the salt pepper shakers, hugging are a gift from Rajani. Thanks a ton dears! 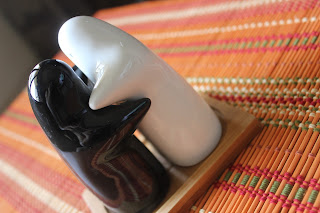 hey..wait…we still have Day 3..do read on…
Print