For Day 2 under Methi recipesI have one of my favorite ones. During winters we eat a lot of fresh fenugreek. We have it in many forms, but two of them are made very often. the Ras wara Methi Aaloo is the gravy version, and the dry version is the one I make this Paratha from. Initially when ever we had some left over Methi Aaloo, I would make a Paratha from it, it became such a hit that now everyone wants to eat only Parathas and not the veggie.

So first let’s make the Methi Aaloo which will be made into a stuffing later.
4 potatoes, peeled and cut into cubes
250 gms methi leaves
2-3 tomatoes
1 small piece ginger
2 green chillies
1-2 tsp turmeric powder
1 tsp coriander powder
1/2 tsp red chilly powder
Salt to taste
Heat oil and add the cubed potatoes.
Add salt and cook covered on very slow fire, till done.
While doing so you might need to sprinkle a little water.
Heat oil in another pan,
Add washed , chopped fenugreek leaves.
Let them wilt.
Add green chillies, ginger paste.
Let it cook till the oil floats up.
Add the tomatoes and the cooked potatoes.
Add all. The spices and mix well.
Simmer and cook till all the spices and flavors are well infused. 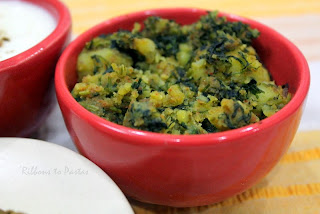 To make paratha
Dough for chapati
Stuffing of mashed Methi Aaloo.
Pinch out a medium sized ball from the dough.
Roll into a 6″ disc.
Apply ghee or oil.
Sprinkle some dry wheat flour.
Take the stuffing and make it into a nice thick ball, I normally take double than the dough ball.
Sprinkle some dry flour.
Bring the sides of disc to the centre thus sealing the stuffing.
Gently press the ball and make it flat.
Dust it with flour and roll gently into a disc, nearly 8-10″ .
Heat the griddle and cook the Paratha on it, flipping from time to time and applying ghee or oil.
It should be a nice golden when ready.
Serve it with curd and papad. 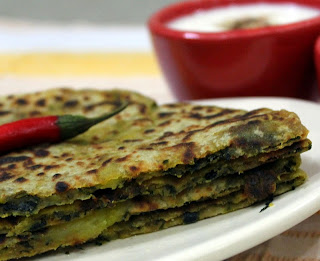