What is BM ?
BM is the short form of Blogging Marathon , where a group of bloggers have come together and post thrice a week for 4 weeks . April and September are Mega Marathons , where we post every day except Sundays . You can read more on this here! BM is the brainchild of Srivalli , who runs Cooking for all seasons and Spice up your life !

What is a BM Meet ?
BM Meet is an event to celebrate ! Our first meet took place in 2013 to mark celebration of completing 25 editions of blogging ! After that these meets have become a regular feature . We had a meet to celebrate 50 th , 75 th and now the 100 th edition ! We have been having a meet with just 9 or 10 , but during BM #100 Meet which was in Hyderabad the participants were 20 +! We had friends coming in from USA , Europe and Middle East . The meet was planned almost a year ago and most tickets were done almost 3-4 months prior . We booked a villa through Airbnb , which was pretty spacious .They had a big kitchen and we decided to cook couple of meals there .

Since we planned to cook we decided to cook one North Indian meal and a South Indian meal . We decided on some chats & breads too . Accordingly an ingredient list was made . This list was handed over to Amaara who is a local and a warm , affectionate and soft person .

Since I like to be organised , Valli and I started our planning few months prior . I ordered the aprons , got them embroidered with BM # 100 . We decided on a souvenir , a Thali ! We ordered the thalis directly from the manufacturer, which saved us a lot of money . My Preps for BM Meet
I decided on a personalized gift for my friends and decided to paint on napkins . I packed these with donut shaped travel soaps .
My next gift were spices – Kala Chat Masala , Peeli Mirch , both being  Delhi Special spices along with Methia Masala , a Gujrati Spice . Along with this I packed the spices I required for the North Indian Thali and the Chaats .
Since The baggage allowance is just 15 kgs , I sent them all by courier at Amaara ‘s . Color Codes
From the very first BM meet we have been having a Color of the Day . We all wear the same colour , but the shades vary . With all in the same colour the pictures look fantastic ! Also it gets easier to spot when going out . ( Does it really ? Ehe he )
We have a mandatory white for the official photo shoot accompanied by aprons . It sure is a task getting the girls into the right colours .

Itinerary
Deciding the itinerary was a task as we had some members coming in for just a day . We kept 18 th as our special day where all the major events took place . 17 th July Day 1
Colour of the Day – Yellow
The Day began early , I was ready in my yellow tunic , my bags were open on the sofa – for the last minute packing ! Vaishali – how come ? I know many would wonder ! I had made the pani poori water pastes and frozen them . I had fried the Aanis for the North Indian Thali , all that had to be put in the check in baggage !

Since my friend Ruchi was travelling with me she came to my place and we left for the airport . As soon as we reached the airport we burst out laughing – we spotted the porters who were in Yellow ! While waiting for the boarding we had some fruits and grilled sandwiches .

And we look for friends in yellow and what we see the whole world is in yellow ! Finally we meet Archana who is all covered in black ! The Princi gets into form only to discover the kids like to play pranks ! Hugs exchanged and we meet some new faces !

Giving the charge to Archana to get all friends to the Villa after lunch and sightseeing , Valli , Amaara and I left for the Villa which we had booked six months back ! At the Villa we quickly unpacked the groceries Amaara had got . I arranged the gifts and my wardrobe with help of these girls and then had a delicious lunch . Yes it was the famous Biryani from Paradise ! In between Usha joined us ! And she walks in with big boxes of the famous Andhra snack and biscuits !

We were waiting for the girls in the bus to arrive , but the bus driver just couldn’t find the location and after a lot of communication finally the bus arrived . While waiting we decided to welcome them with a Rajasthani welcome song and with Aarti and Teeka . Dance to enter the villa was mandatory ! The girls were shy , but we definitely have supportive ones too , like Sandhya , Sowmya , Varada ! Once every one was in it was only chitter chatter ! Ritu , Pradnya joined later . Preeti and I ordered the dinner from a nearby dhabba , the food was good but the portions were very big . After dinner the party began ! We had a lovely dance by Srividhya and Sharmila , then a solo dance by Sowmya . The bakers were busy preparing the BM cake . 18 th July
5 : 30 am
I woke up with the aroma of the Daal Makhani ! Ritu woke up really early and was literally running in the kitchen to complete her dish. A North Indian Thali was planned and the team had Preeti , Pradnya , Ritu , Ruchi , Varada and me . We planned a menu picking complete North literally ! Here is the menu – While we were preparing we had a super surprise ! Kalyani who was down with virus and cancelled her plan , walks in ! It was indeed a pleasure . Harini joined in soon and it was great meeting her too . 18 th was a hectic day , we had to change from greens to whites for the Photo Shoot . We had a professional photographer who was a real sweet person – he made sure to arrange the group so that all could be seen ! And his eyes would sparkle when he made a smile action ! At times it was hard to stop laughing ! Before the cake cutting ceremony we took some team pics , the naughty girls put the caption for Valli and me as Stick & Sound . Me the stick and Valli the sound ! Wait girls for the next meet ! You will surely see the stick and sound in action ! Ehe he ! Lots of pics were taken ,in whites and in greens ! After that the meal followed . Before the meal , Valli had planned a surprise cake for me ! It surely was one of the most beautiful surprises I could have ever got , my 60 th birthday celebrations with my BM family ! It surely makes me feel emotional . Thank you Valli ! Thank you girls ! Post lunch we distributed the gifts . All were exhausted and most of them seriously followed the itinerary where Valli had put the word Nap , yes they actually napped ! Amaara , Valli and I went out to pick some stuff that we required for the next day and then all of us got ready to leave for the formal dinner at Vivah Bhojanam . In between Srividhya , Sharmila and Kalyani left . After getting ready we booked cabs , Ritu , Sowmya , Preeti and I were in one cab . On the way I was talking to my hubby who wanted me to buy some flowers – the Veni or gajra as we call in Hindi . I asked the cab guy to stop wherever he could see a flower vendor . And then suddenly I realised that I was not carrying any cash ! Can you believe none of the girls in the cab were carrying cash ! Glad that one group had reached before us , Pradnya paid for us ! Thanks Pradnya ! Vivah Bjojanam is a restaurant where they serve a wedding spread . The ambiance of the place was interesting so we all took loads of pics . When the food was served , I was expecting a authentic spread , but with the changing trends the restaurant served pretty modern snacks . Due to my disappointment, Priya Sri scared the poor stewards and they tried their best to make the Princi happy ! On the whole the food was good , I loved the Ragi Mudde , something I would love to try for the family . The Dessert was quite a unique one it had cake , custard and jamun . Hey wait ! These are not the Gulab jamuns , but the purple fruit jamuns ! I ordered one without cake and extra jamuns and simply loved the combination . Back to Villa ! We had a sugar crafting session with Ruchi , where the class was super drowsy , but not to be blamed as all were tiered !

So off to bed ! Valli and I were sharing the room so both of us were talking – perhaps it was 4 am when we slept !

Now I need some rest will come back tomorrow with the details of Day 3 & 4 ! 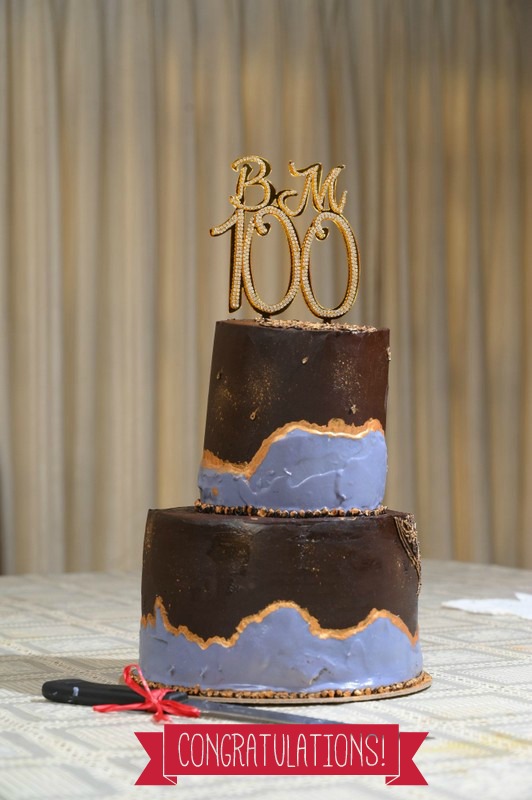