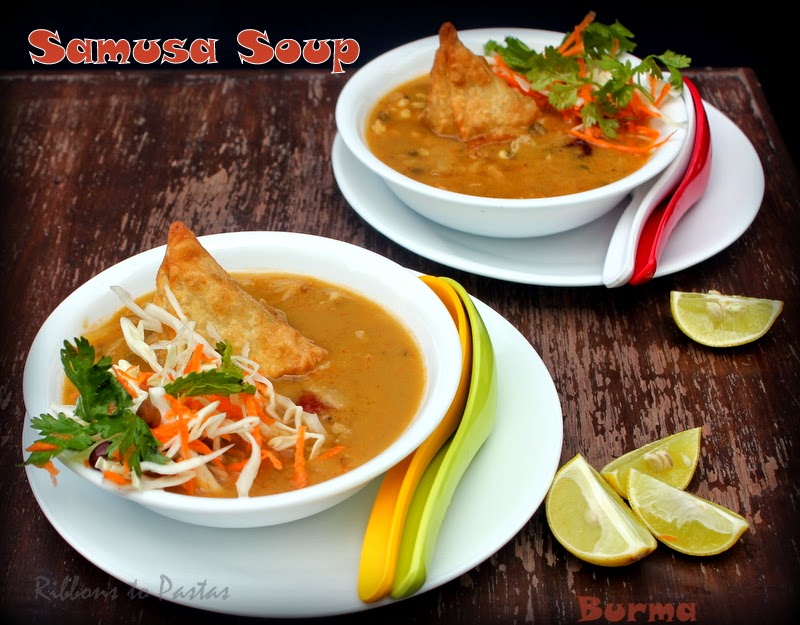 Burma
Burma, officially the Republic of the Union of Myanmar, commonly shortened to Myanmar, is a sovereign state in Southeast Asia bordered by Laos, Thailand, China, Bangladesh, and India. 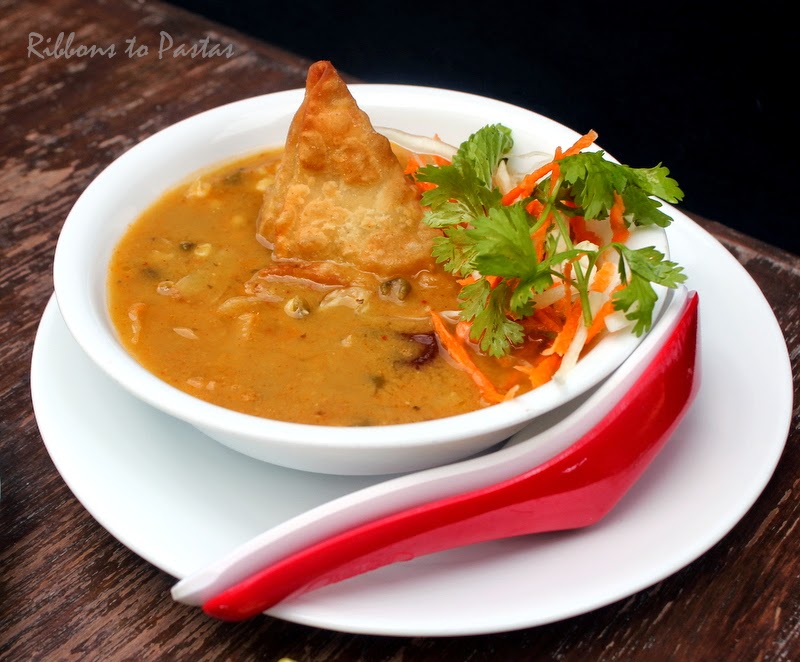 Sharing borders with India, China, Laos and Thailand, Burmese cuisine is inevitably influenced by the spices, seasonings, ingredients and cooking styles of its neighbors. Yet it is the way that these ingredients are combined which make Burmese dishes unique.

Most Myanmar people regard soup as an indispensable component of a meal, possibly because Myanmar people do not normally drink wine, or even a glass of water at meals . Good spicy soups not only facilitate the dining process but also stimulate the appetite of diners. Sometimes, when soup is not available at the meal and the dishes are too dry, a hot cup of green tea is served instead.
There are many different styles of soup. There are sweet broths that are clear and bland and contain meat or fish and certain vegetables. There are bitter soups that are also clear but peppery and spicy, usually to go with salads as a fast food combination. Some soups are rather sour and made so with the aid of tamarind pulp or tomato. They mostly contain vegetables to lessen the richness of a meal. Finally, there are bean soups of various kinds that are thick and tasty and usually splashed over rice as a dampener.
Coming to their street food, they have a variety of dishes.
Street food is varied, accessible and inexpensive. For today it is their Samusa Soup or Samusa Thouk as they call it. 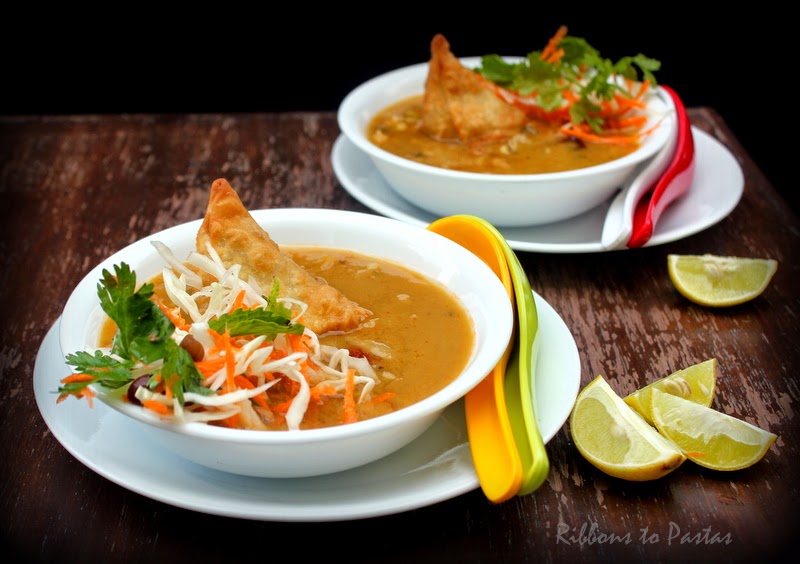 Samousa Soup
1/2 cup pigeon pea / toor daal
1/2 cup black gram
2 tablespoon oil
1 teaspoon jeera (cumin seeds)
3 dried red chilly
1 onion sliced
3 green chilly, sliced
1 teaspoon black peppercorns
1 tablespoon coriander ground
2 teaspoons turmeric
1 teaspoon kashmiri chili powder
2 teaspoons garam masala
10-12 cups of vegetable stock or water or a combination
2 teaspoons tamarind paste
1/3 of a cabbage sliced
salt to taste
2 cups bean sprouts
1/2 cup green onions chopped
1/2 cup cilantro chopped
8 samosas
Soak the kala channa overnight.
Pressure cook the channa and toor dal in a pressure cooker till done.
Heat oil .
Add jeera and cook until toasty, then add the red chilies.
Add the onions and saute until browned.
Add the slit green chilies .
Meanwhile toast the peppercorns in a dry skillet, then in a spice grinder grind the peppercorns, coriander, turmeric, chili powder and garam masala. You can just grind the peppercorns by themselves, but I find that spices grind better when there is more volume.
Add all the powdered spices and cook for a minute.
Add the vegetable broth and/or water (I used a combination of broth and water), channa, toor dal, and the tamarind and cook over medium heat for at least 30 minutes.
Add the cabbage and salt and continue to cook until the cabbage is soft.
Add the bean sprouts and green onions.
Deep fry the samosas.
Cut the samosas in fourths and put a few pieces in each bowl.
Top with cilantro.
Originally they have large punjabi samosas, but since I did not want to cut them I used mini samosas.
Recipe Source – Here 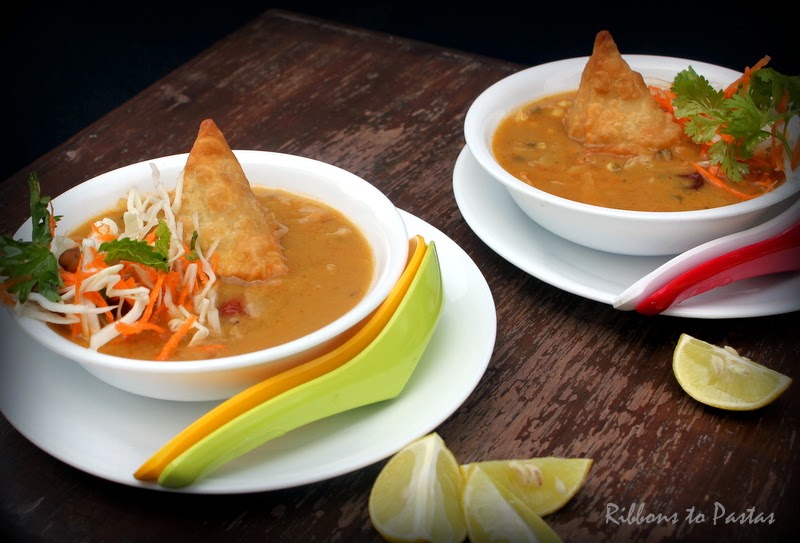 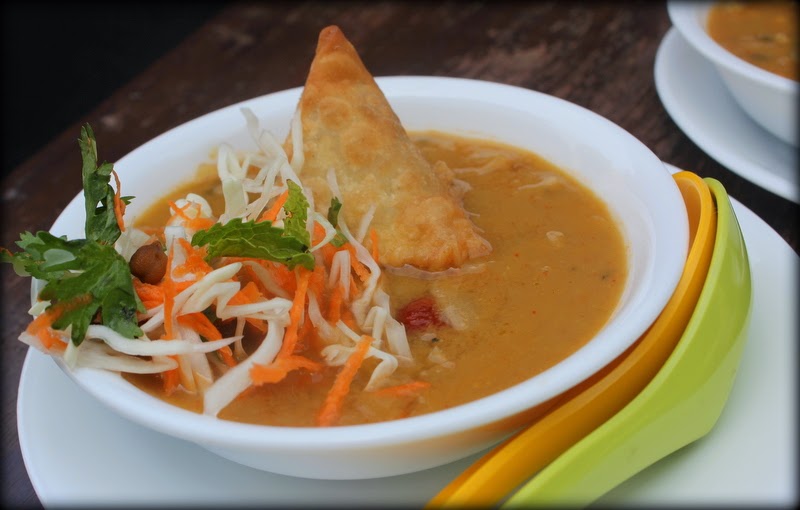 Frankly speaking I am not a soup person so initially gave this a second thought, but after reading the recipe I was sure it would taste well, and anyway I am quite fond of samosas, so knew those could be the rescuers. The soup was more like our toor daal that we cook with rice, I could easily call it a blend of Sindhi daal and curry. The samosa acted as the dumpling and added an interesting element to the dish, and it was as good as a meal. The tangy tamarind made it awesome, the veggies made it whole some and finally the greens gave it a wonderful crunch. 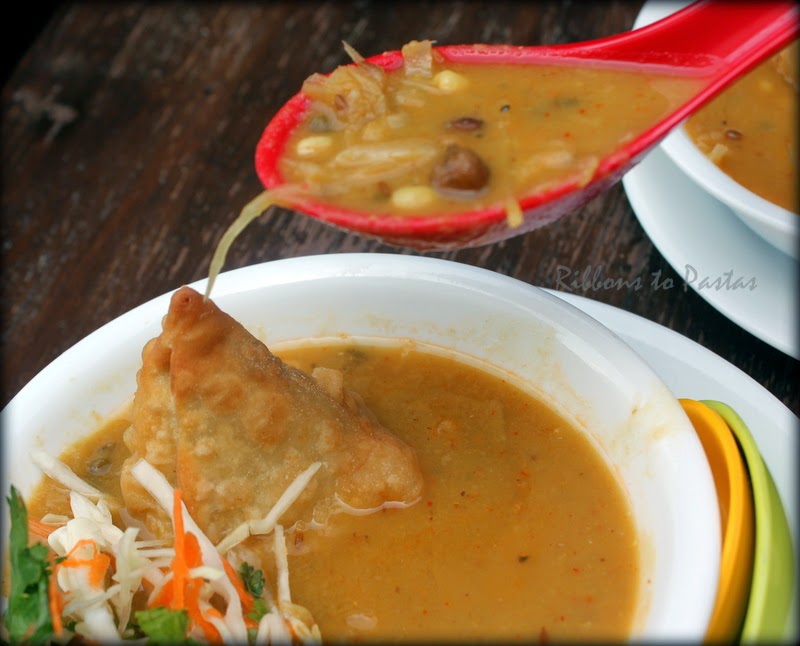 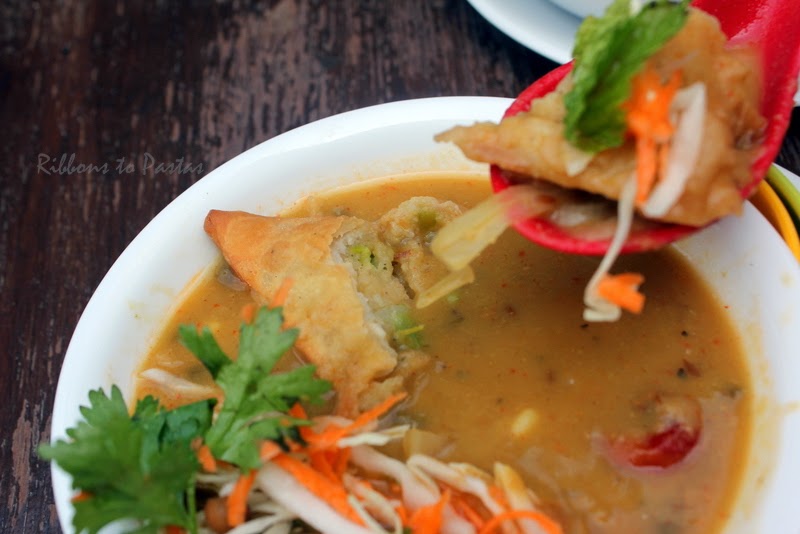 Bhareli Poori is a unique breakfast, where the Poo

The alphabet C brings us to Chandigarh, Punjab. Pa

We are beginning our A to Z Series this month. I h