Thotha ane Bajri no Rotla , a Gujju combo from India 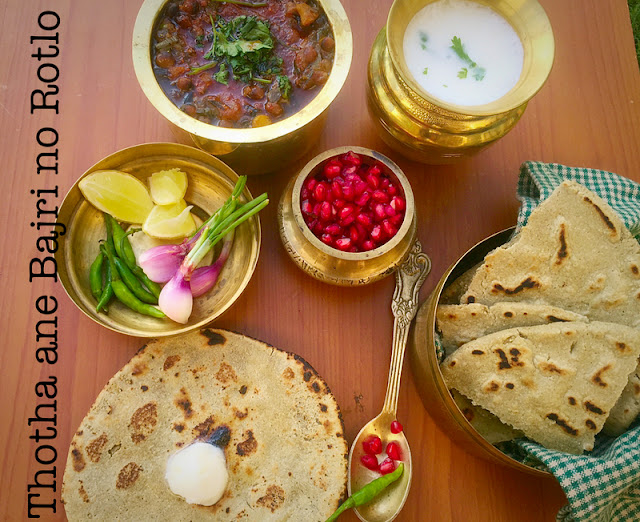 BM # 56
Week : 1 , Day : 5
Theme : Classic Combos
Country : India, Gujarat
We are working on the theme of Classic Combos. Till now I have posted all international combos, but to day I have a combo which is famous among the Gujrati’s specially the farmers . Thotha and Bajra no Rotlo.
Thotha is a Gujrati dish made with dried whole pigeon peas. Strange I learnt about this dish only recently in spite of living in Gujarat since years. This is supposed to be farmers food.
In India, pigeon pea takes more than a supporting role. Indian farmers produce the majority of the world’s crop, and most of this is dried and split to be cooked as toor dal, a widely eaten source of protein especially in Gujarat.Pigeon peas are especially important to nutrition in poor households, packing lots of protein along with vital amino acids and vitamins. This is the only legume crop that grows as a woody shrub, it also provides firewood, building material and green fodder for animals and thus the reason for the farmers choice. 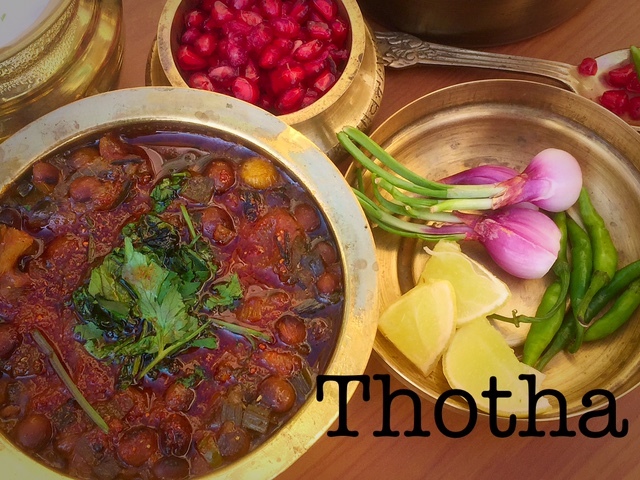 So they use the whole dried pigeon pea, which is soaked overnight and cooked with lots of green garlic, spring onion and tomatoes. It is served with Bajri na Rotlas which are made on coal.
Bajri is a Millet , a tiny “grain like seed”which is gluten-free and packed with vitamins,minerals, calcium, fiber and iron. It acts as a prebiotic and digests easily with bundle of benefits for your health. The farmers , the poor and the rich in Gujarat literally live on the bread made from this millet.
Bajra na Rotla is an authentic Gujarati Flat Bread which is rolled between palms instead of rolling on a counter. These are rolled really thick and quite big in size. I feel it is an art which is difficult to master. People in Gujarat love to eat them with fresh white butter and jaggery especially in winter season. Spring onion and fresh green garlic lend a very rustic taste to the dish , and let me tell you that it is a typical winter dish.
So let’s get to the recipe. 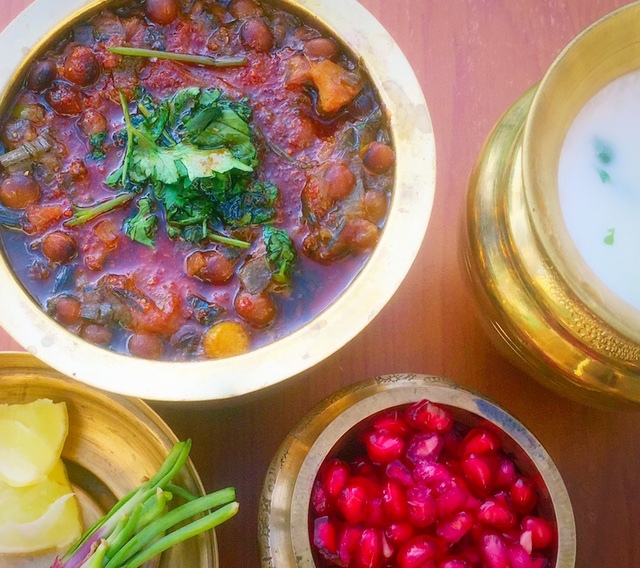 Soak the dried whole pigeon pea overnight.
Boil with salt for 5-6 whistles, or till done.
Heat oil.
Add ginger garlic. Saute till pink.
Add spring onion and cook till completely wilted.
Add tomatoes and cook till they are nice and mushy.
Add all the dry spices and then the boiled thotha.
Simmer and cook for 10 -15 minutes and let the oil float up.
Serve with bajri ka rotla. 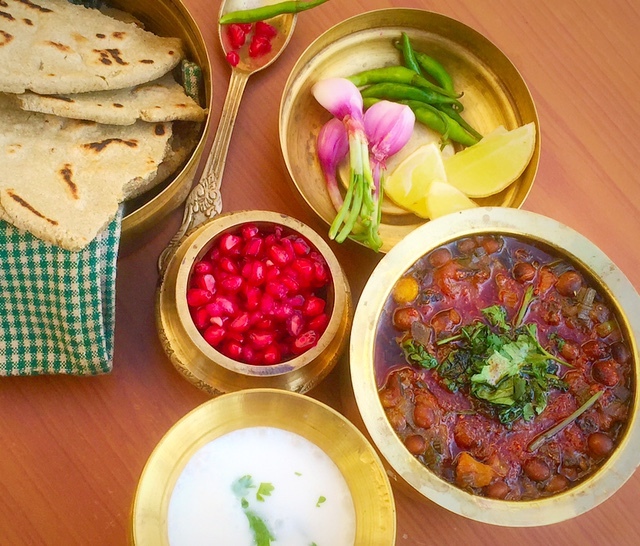 The typical combo has always been Thotha and Bajri na Rotla, but people are now shifting to Thotha and bread combo. I have tried both the combos, of course the rotla is a real rustic combo, though with bread one feels quite light. So the choice is yours!

Also I want to mention that I have mentioned 250 ml oil, which is a lot !..and it is no typo. The authentic dish is made with that much oil. Personally I would not use, but here I wanted to show case an authentic dish.
This was a week where I posted Classic Combos, here is a small re cap !
Fish and Chips, a British combo
Tomato Soup and Grilled Cheese, a favorite American Combo
Yellow Thai Curry with Steamed Rice, Thai Combo
Cassata Cake with Ice cream ,a Italian combo
Chocolate , three ingredient icecream
Thotha ane Bajri no Rotlo , a typical Gujju combo from India

Thotha ane Bajri no Rotla , a Gujju combo from India

21 thoughts on “Thotha ane Bajri no Rotla , a Gujju combo from India”