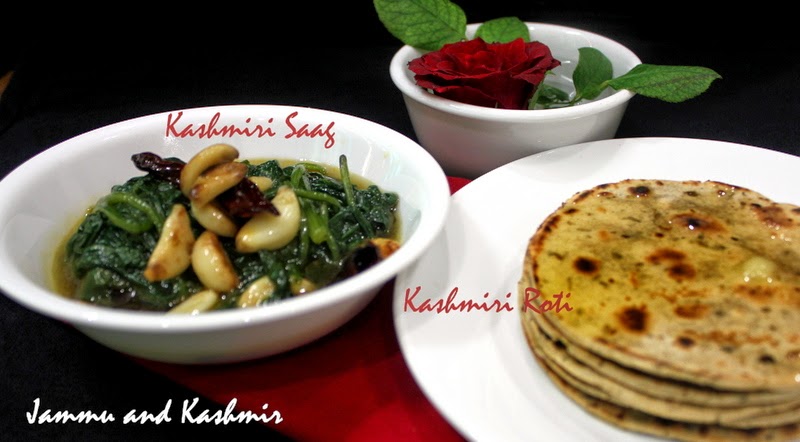 The state Jammu and Kashmir consists of three regions: Jammu, the Kashmir valley and Ladakh. Srinagar is the summer capital, and Jammu is the winter capital. While the Kashmir valley is famous for its beautiful mountainous landscape, Jammu’s numerous shrines attract thousands of Hindu pilgrims every year. Ladakh, also known as “Little Tibet”, is renowned for its remote mountain beauty and Buddhist culture.The cuisine of all three regions is different from one another.
Three different styles of cooking prevail in the state as Kashmiri Pandits, Muslims and Rajput follow their own traditions and proscriptions in cooking. Kashmiri Pandits refrain from the use of onions and garlic, while Muslims avoid the use of asafoetida (hing) and curds.
Kashmir excels in the preparation of non-vegetarian cuisine and more so in the meat based dishes with lamb being preferred over others. People of the state are liberal in the use of spices, condiments and curd. The medium of cooking is chiefly mustard oil. Another characteristic of Kashmir cuisine is the liberal use of saffron or kesar, which is produced in the state. The vegetarian cuisine is also very special and we cannot miss the ever so popular Zarda, Kashmiri Dum Aaloo ,Methi Chaman, Raajma Rismise.
Kashmir is a valley which is popular for its dry fruits and so lot of preparations are made by using them, the Shufta, Doon chetin, Phirnis are all very popular.
Tea drinking forms a very important of Kashmiri Pandit cuisine and is often used in place of dessert. Two very important types of tea are Kehwa (Sweet Green tea with Cardamom and almonds) and Sheer Chai (salty pink tea with almonds). Such teas are usually taken with Baked Breads like Kulcha and Katlam. 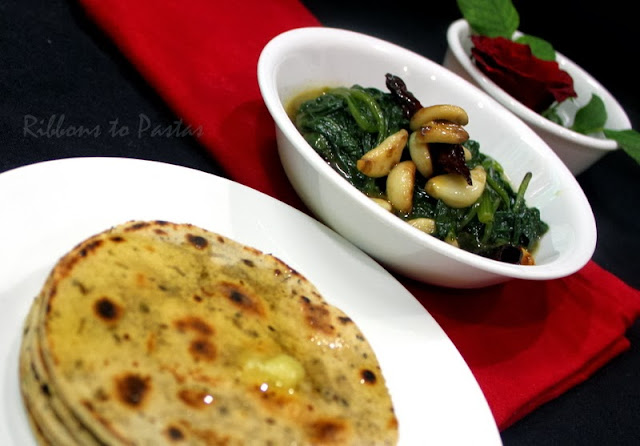 Today I shall cook from Kashmir.For today it’s Kashmiri Saag with Kashmiri roti. This saag or roti are not new for me as I have made the Kashmiri rotis and the Saag many times, , but never made a combo of these two. The Kashmiri saag is a total treat, very simple and quick to prepare this recipe simply amazed me. One can’t prepare anything simpler with such a wonderful flavor. A dish where no chopping is required, no spices are required and yet tastes mind blowing. I must tell you that it is the use of mustard oil in the dish that is the key to this recipe, please do not substitute it.The roti has a very nice flavor and for a person like me, I would not need any thing to go with it,.it can be relished right from the griddle without any accompaniments, just a blob of pure ghee. 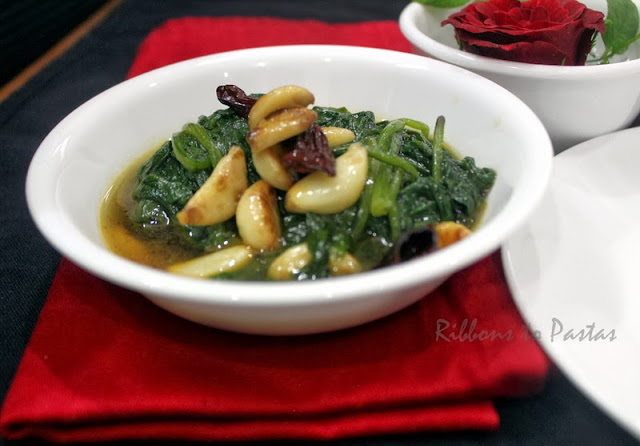 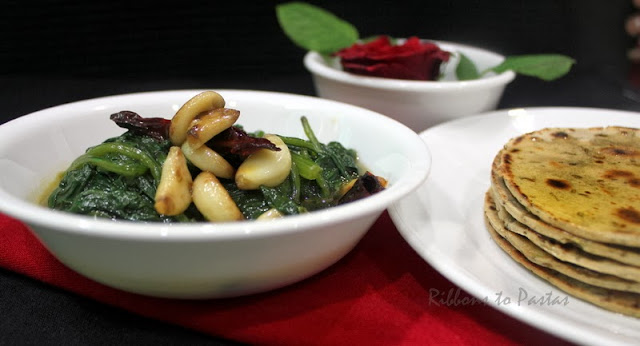 For those who like a spicy meal, while eating saag make sure to press the red chillies and squeeze their juice, it adds spice to the saag and tastes awesome, people who do not like spicy, could simply eat without the use of red chilly.