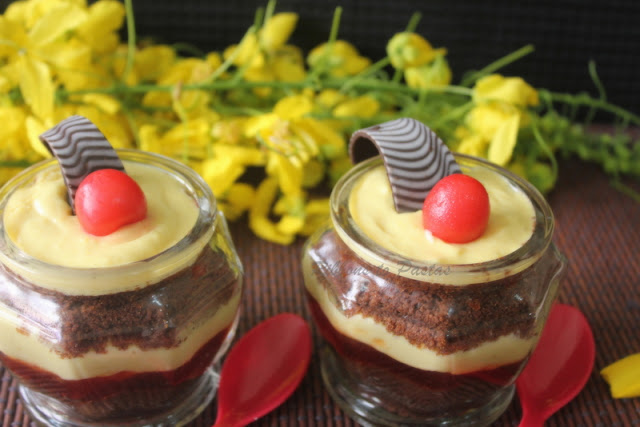 Today is the last day in A-Z series.When I began preparing for this BM , I started with the alphabet Z. So, this was my first post , but actually last to be posted.
Zuppa Inglese is an Italian dessert.The word Zuppa in Italian Cuisine refers to both savory and sweet dishes.It comes from the verb inzuppare, which means to dunk.
The dessert is originally made with either sponge cake or savoiardi, dipped in Alchermes, a bright scarlet colored aromatic liqueur. It is layered with a creamy custard which is loaded with eggs and flavored with lemon zest. 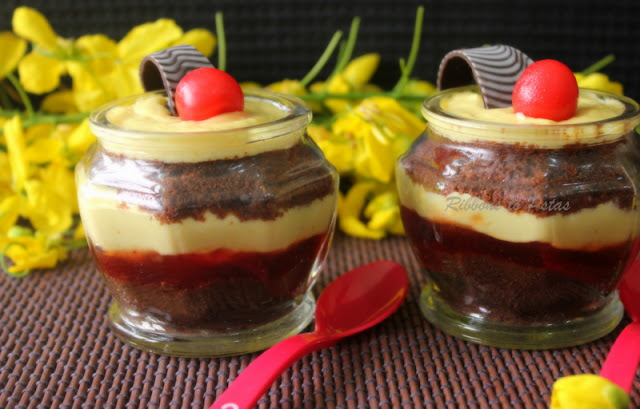 I made this dessert twice, the first time I used whipped cream and mascarpone cheese, a layer of orange marmalade and some orange segments. The dessert came out awesome, but I felt it did not look like the Zuppa Ingelese pics that I had seen .I gave it a second try. this time I used thick custard and folded in some whipped cream.For that scarlet look I used mixed fruit jam and orange crush. this gave me the exact color and look  I wanted.
Well, there are lots of substitutes in this dessert, but I can promise you it tasted really very good and both the trials were equally delicious ,though my kids loved the second version more than the first.
There is nothing like a recipe to this dessert, it is all about assembling. I shall give you the recipe for the custard which is slightly different than the one we normally make. 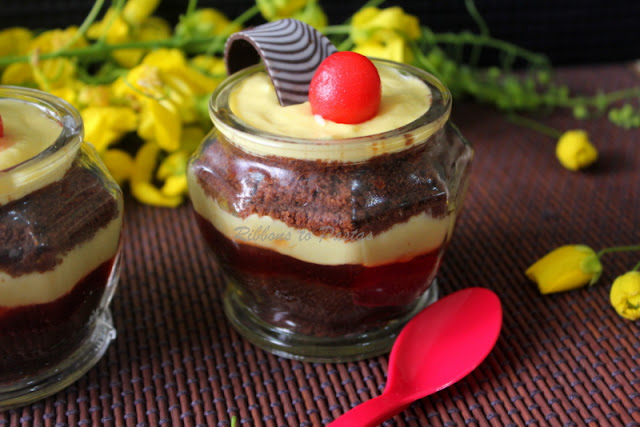 Custard
250 ml milk
Sugar to taste
4 tsp custard powder
One big piece of lemon peel
Dissolve the custard in a few tbsp of water.
Boil milk, add sugar
Add the dissolved custard to the boiling milk, keep stirring all the time.
Switch off the gas.
Remove the lemon peel.
Let cool, be careful, skin should not form on the custard.
Fold in 1/2 cup whipped cream.
This was enough for three servings.

Here is what I used
Chocolate sponge cake
Orange juice

Cherry and chocolate pieces for garnish
How to go about
Layer the dish with sponge cake.
Sprinkle orange juice, using this as a soaking syrup.
Mix the jam with orange crush to get that scarlet color.
Spread a layer of this mix over the sponge.
Spread a thick layer of the prepared custard.
Repeat layers.
Garnish with chocolate pieces and cherry.
This desserts need at least 4 hours resting time in the frig for the flavors to infuse, though the original one needs minimum 24 hours.
Serve chilled. 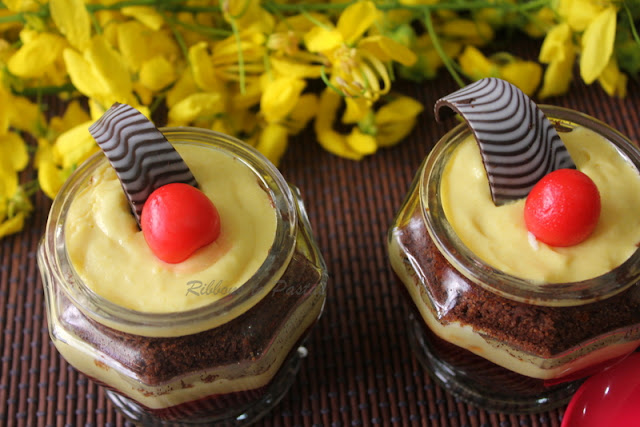 Friends this month long marathon with A-Z series has been very interesting and Kudos to every one for putting in efforts.Special Thanks to valli for organizing and being patient with all of us .

This post also goes for the weekend cooking where Valli and Champa join me every Monday.
Print Recipe
Zuppa Ingelse