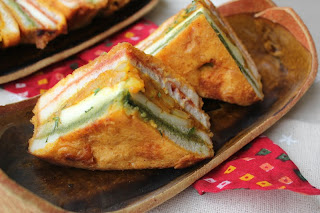 Last day of the BM # 6 and Valli has given a new twist to this marathon by pairing two bloggers and cooking from each other’s blog …ofcourse keeping the theme in mind.My blog partner Manisha,has a Rajasthani blog and has some lovely recipes,a few were suitable for my picnic theme,but I picked up these Bread Pakoras.I am a person who believes in telepathy…..well while planning the 7 day posts this bread pakora was on the list…..and there it came on Manisha’s blog!!I have made a slight variation to this by stuffing a slice of paneer between the potato layer.
I made two types of pakoras …one with four slices ,the big jumbo pakora..and the other with three slices ,cut into quarters and then fried and cut.the mini ones go to Champa for the kids delight.Now the recipe…
Jumbo Bread Pakora
4 slices bread
Ketchup.
Green chutney
A big slice of cottage cheese(as big as the bread slice)
1/2  cup potato mix
For the potato mix
1 large boiled mashed potato
1tsp oil
¼ tsp cumin seed
1/4tsp red chilly pwd
1/4tsp turmeric pwd
¼ tsp aamchoor pwd
Pinch garam masala
Salt to taste
Coriander leaves
Heat oil.
Add jeera,let it splutter.
Add potatoes and spices.
Mix well.
Besan batter
2 cups..besan
½ tsp chilly pwd
1/4tsp turmeric pwd
1/4tsp baking soda
Pinch hing
Salt to taste
Water for the dough
Mix all the ingredients and make a batter for pakoras.
Dont make it watery..n be careful..dont make it very thick .
How to go about
Spread a layer of potato mix on two slices of bread.
Place a cottage cheese slice  and make a sandwich.
Apply ketchup on the third slice and place it on one side of the sandwich..ketchup layer down.
Turn the sandwich.
Apply a generous layer of chutney on the fourth slice,place it on the sandwich…again chutney side down.
Both the top and bottom slices would be plain.
Dip into the batter and deep fry.
You have to be careful while frying this,since it is a jumbo sandwich.let it cool .
Cut diognally for best looks…you could cut it into fingers too.
The mini ones
You could use chutney ,ketchup and paneer.
You could use potato and cottage cheese.
Cut into quarters.
Deep fry.
This becomes simple to handle.
Cut the pakoras  diognally to see beautiful colors. 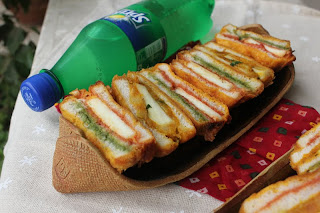 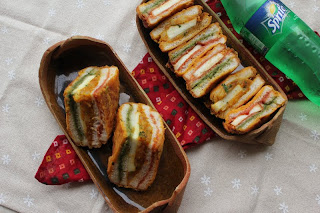 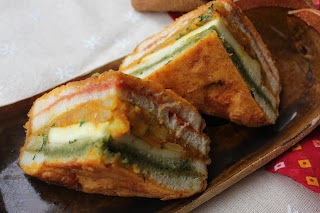 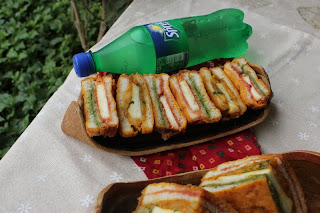 This is the last day of this marathon,here are some of the recipes  I have posted in this series…
Falafel
Chole Kuche Roll
Bun Samosa
Submarine Sandwich
Vegetable Corn Handvo
Choclate Cake

Check out the Blogging Marathon page for the other Blogging Marathoners doing BM#6 hosted by Srivalli…and looking forward to another edition of marathon and being with you all.
also sending to…..
http://versatilekitchen.blogspot.com/2011/06/running-roundup-for-kids-delight-mini.html 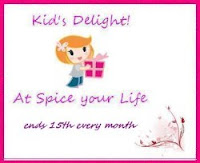 these pakoras also go to…
http://showandtell-vatsala.blogspot.com/2011/05/50th-recipe-modak-and-event.html..