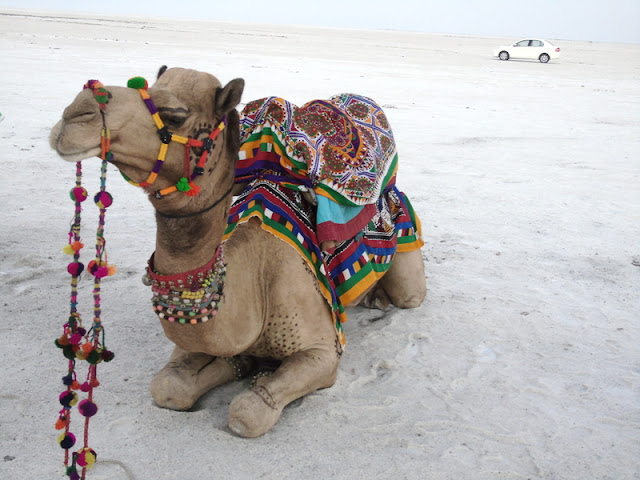 Let me take you to Kutch today.

Kutch district is a district of Gujarat state in western India,and it is the largest district of India.
Kutch literally means something which intermittently becomes wet and dry; a large part of this district is known as Rann of Kutch which is shallow wetland which submerges in water during the rainy season and becomes dry during other seasons. The Rann is famous for its marshy salt flats which become snow white after the shallow water dries up each season before the monsoon rains.
Kutch District is surrounded by the Gulf of Kutch and the Arabian Sea in south and west, while northern and eastern parts are surrounded by the Great and Little Rann(seasonal wetlands)  .
This district is inhabited by various groups and communities. Many of these have reached this region after centuries of migration from neighbouring regions of Marwar(Western Rajasthan), Sindh, Afghanistan.

The language spoken predominantly in Kutch is Kutchi language, a slightly varied dialect of standard Sindhi, to a lesser extent Gujarati, and Hindi.
In the villages, staple foods include bajra and milk; bajara na rotla with curd and butter milk is very common food for all the Gujarati people.
This is about the Kutch region of Gujarat, I took a trip to a small town called Gandhidham in Kutch. My father’s sister has been living there since years but somehow I have visited the place only on occasions where one is not able to explore the place.
This year mom and I decided to visit my aunt and while on this tour I was able to explore this region. For me exploring a place is naturally exploring the cuisine and the specialties of the place.

Gandhidham is a very small place and to reach a destination you need just a few minutes, so it was easy to go around . My cousin’s children who are no longer children took me around and trust me I was amazed to see the street food of this place. 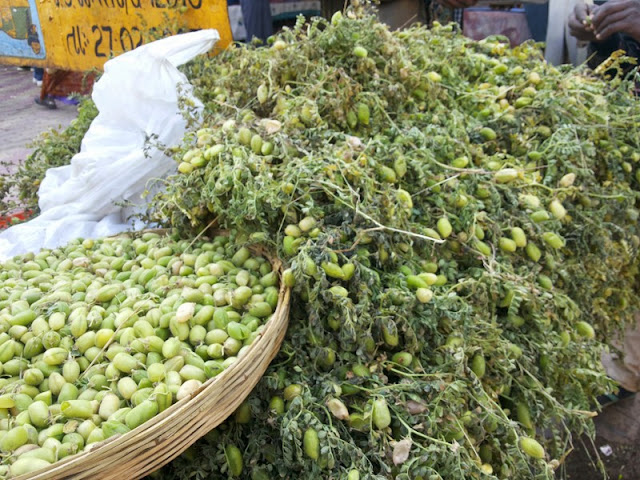 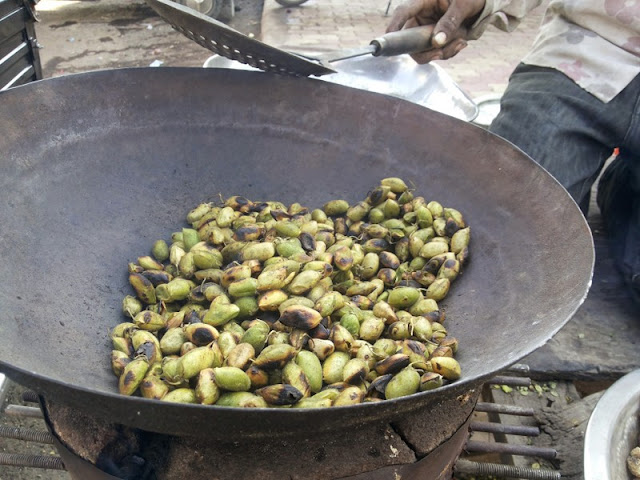 Fresh green channa.roasted with their pods
Vada pav
Vada pav is a Maharashtrian street food which is very popular in Gujrat too. We have a Ahemdabadi version of Vada pav which is dunked in butter and garlic chutney, but the Kutchi version was absolutely different. They served loads of mini chilly pakoras along with the Vada pav. A post on this version is due since long! 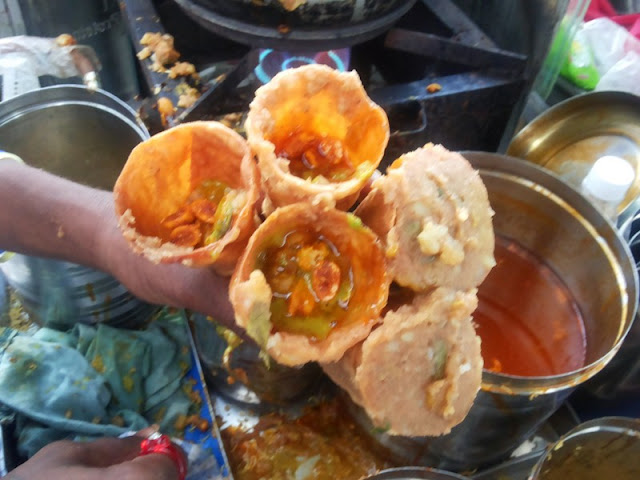 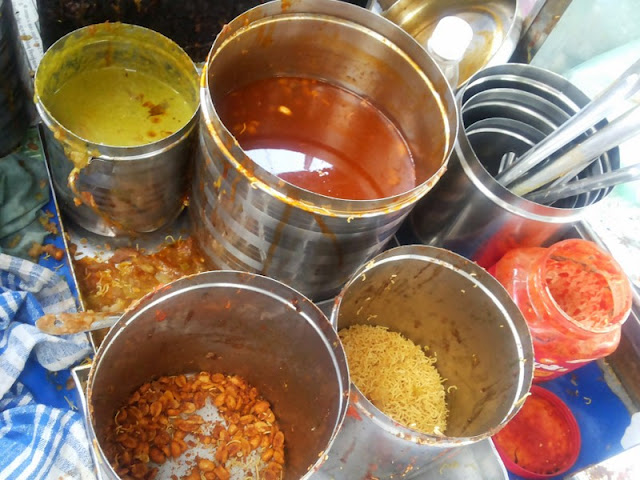 The cone
When we say Cone we naturally think of ice cream, but this is a savory cone made of all purpose flour. The cone size is just like ice cream cone. The vendor has a stove where he has a masala or stuffing made of spiced potatoes. He stuffs a little of this stuffing in the cone , adds some chutneys, tops with spicy peanuts and repeats the process . Definitely a very delicious savory cone.
It definitely was not very appealing hygiene wise , but I loved the concept. 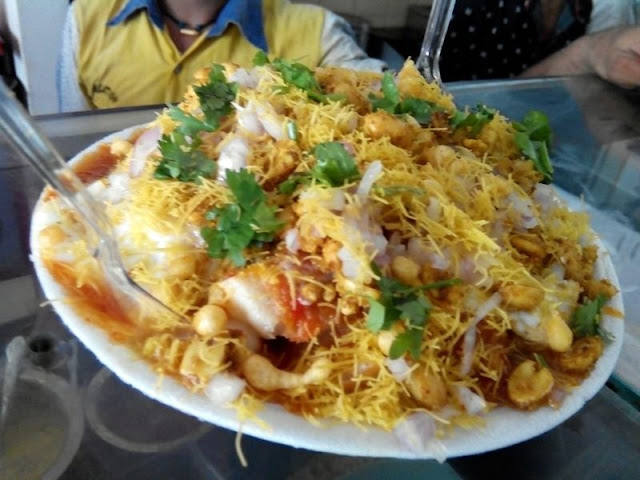 Ice Dabeli
Dabeli
Dabeli is a Kutchi street food and is popular all over the world now, but in Kutch you get dabeli in umpteen variations. One variation which made me curious was the Ice Dabeli. I wondered what it would? Can you guys guess? …well this Dabeli was made in a slightly different manner with chilled curd and chutneys, hence the name Ice Dabeli. 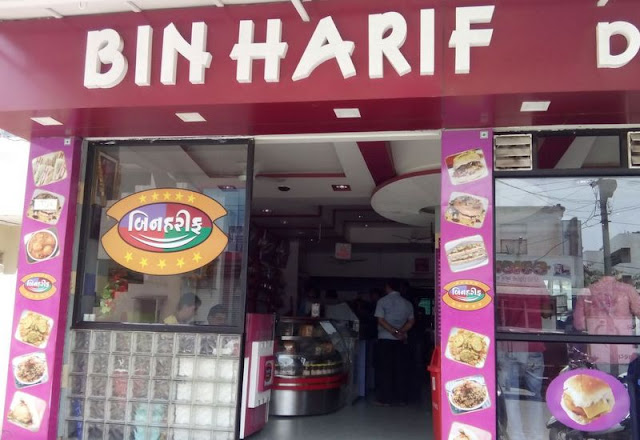 The most famous Dabeli shop of Kutch
Kadak
If the pav bun remain in the oven and become hard just like rusk, what would you do? , probably throw them. Rt ? …well Kadak is a Chaat made with those hard pav buns , potatoes, peanuts and chutneys! A speciality of Kutch, this was totally new to me!
Besides these they had the regular pani puri, Tikki Chaat and the routine chaats that are available all over.
Fortunately we had chosen just the perfect time to visit Kutch .
We wanted to go and visit the Rann of Kutch where the famous festival Rann  Utsav is held, I am sure most of you must have watched the advertisement by Amitabh Bachan .
First a little about the Rann. 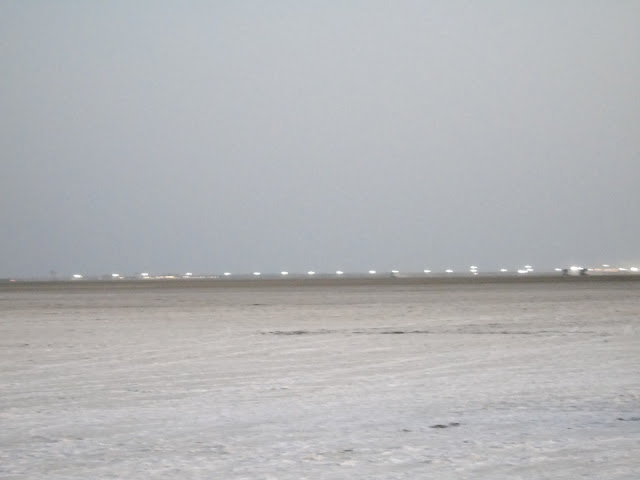 The Rann is a seasonal salt marsh located in. The Thar Dessert in Kutch. The name Rann comes from the Hindi word Raan, meaning dessert. The Rann is all white and on a full moon night it looks absolutely breathtaking. An unexplained strange dancing light phenomenon locally known as Chir Batti occurs in the Rann. 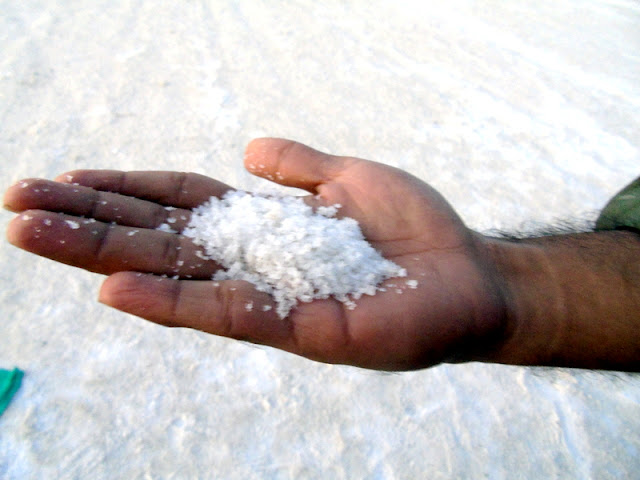 The famous Rann Utsav is held every year between December and March.It is a cultural and artistic extravaganza which is organized by the Gujarat tourism annually.the fair showcases traditional Indian art forms and celebrates the distinctiveness and diversity of the Kutch district. Tourists can see the various sights of the Rann as well as get the taste of the local culture, cuisine and hospitality. Specially built local houses are also used to house the tourists. 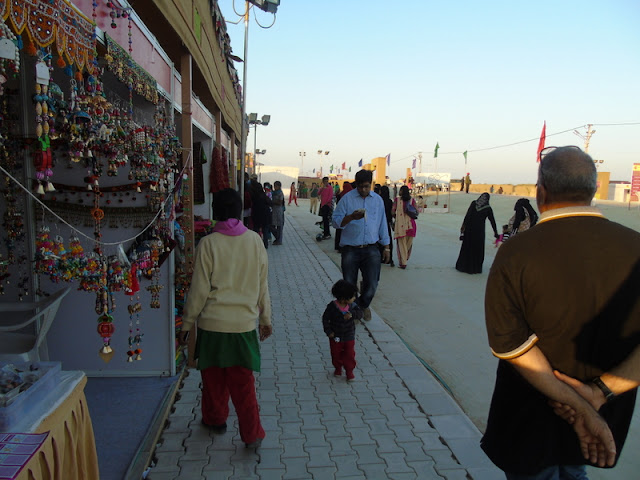 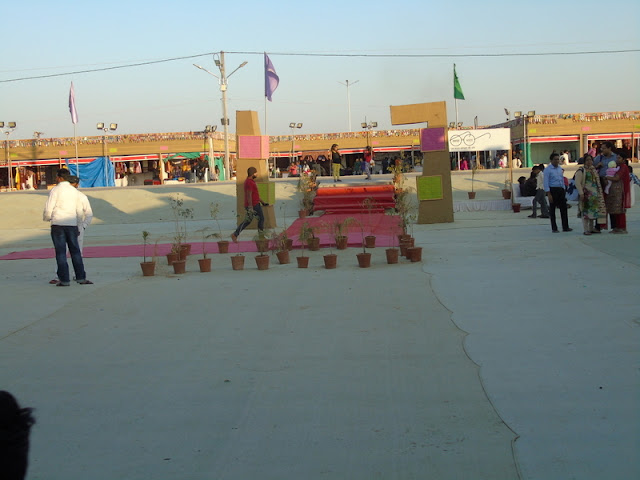 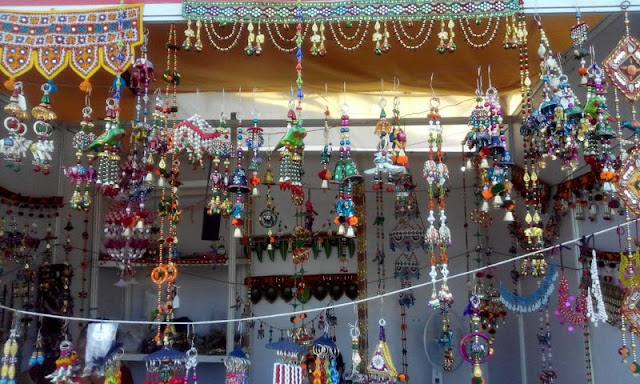 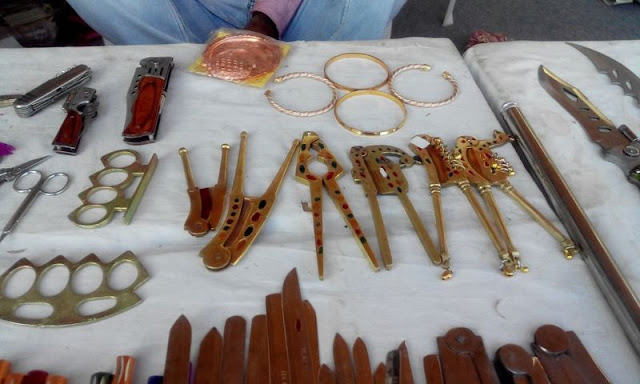 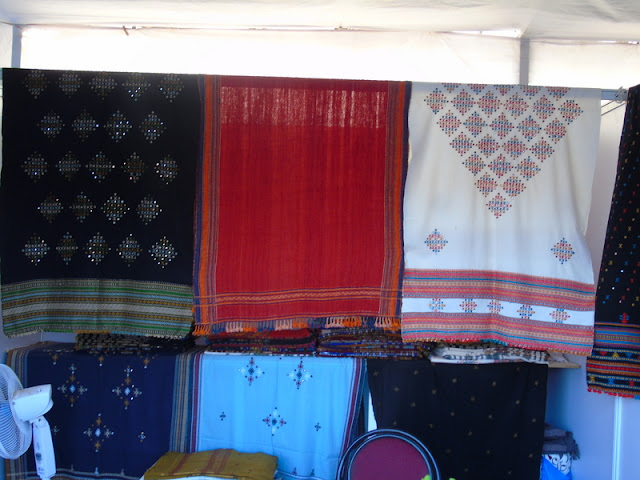 The festival is interesting and one gets a visual treat of traditional culture, shops are lined up selling the Gujrati handicrafts and cuisine. Activities like traditional dances and music highlight the fair. While going around the stalls there was one very interesting food stall which attracted me. They sold those fry yum pipes, which we had as kids. I remember those pipes, we used to put them all in fingers and play. Well the same pipes were served with garlic potatoes. These pipes are called Bhungra and served with Lassaniya Bataka. They tasted delicious and it was quite a fun snack to enjoy. 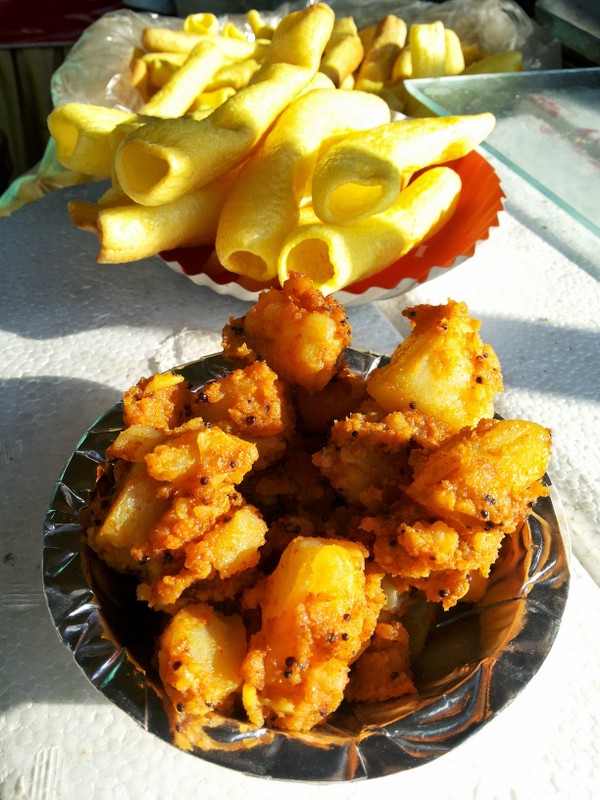 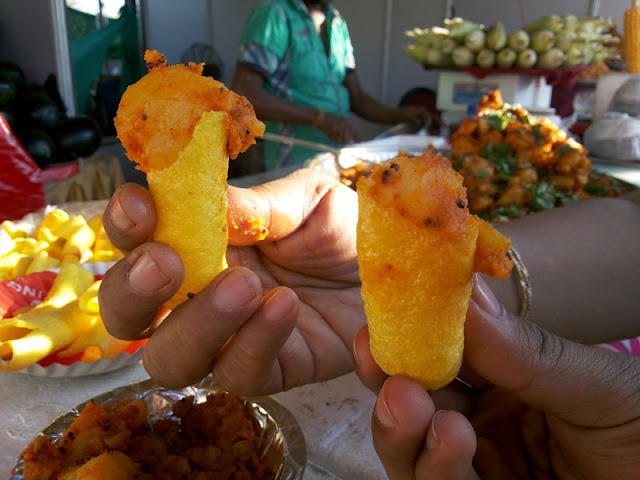 I love to shop traditional stuff so I picked some Kutchi mirror work shawls for the family. We were there for one evening which was a memorable one.
We returned back to Gandhidham and the very next day we left back for Ahemdabad.
All in all it was a beautiful trip where I caught up with my paternal family, who went overboard to take care, a food journey and exploring a mesmerizing Rann with super shopping . 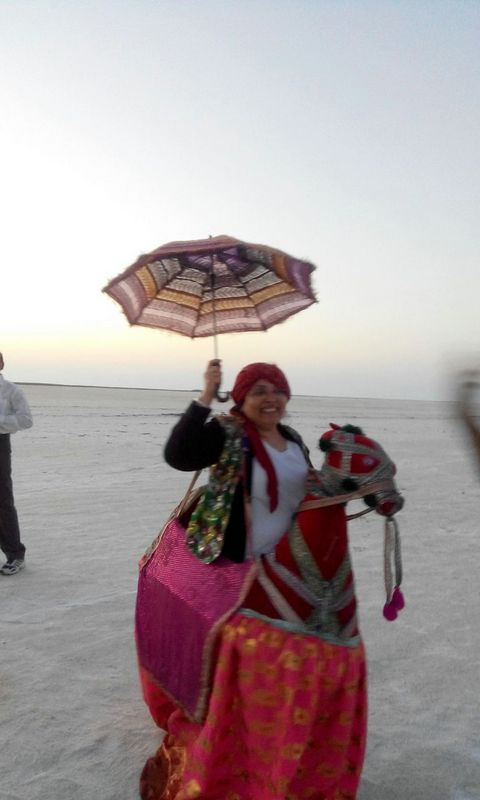 This picture shall show you the super fun we had with the cultural activities in the Rann !

17 thoughts on “Kutch , The Street Food and The Rann Utsav”