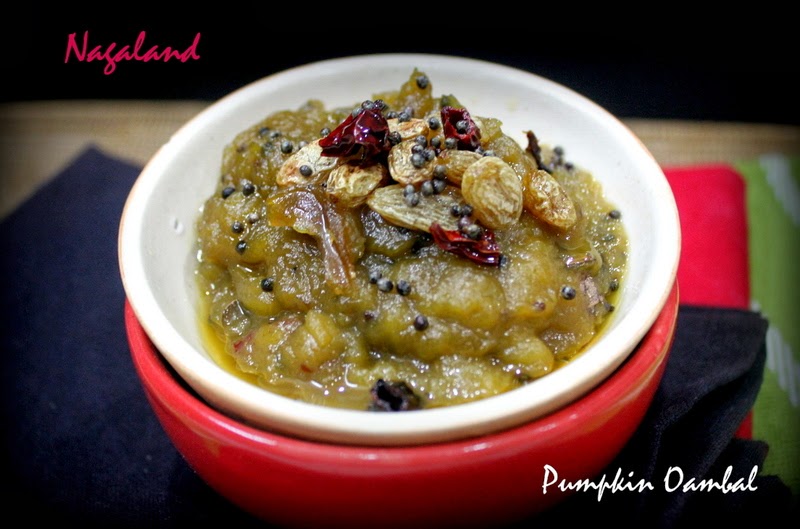 On the 20th day we are cooking from Nagaland. The information of this state gave me extreme shocks…read on….

The Naga cuisine is primarily non-vegetarian, although vegetables are included in the cooking. The food is extremely hot and spicy as the Nagas use Naga King Chilli in most of their dishes. This is the hottest chille pepper in the world.
The state comprises 16 main tribes whose occupation is primarily agriculture. Hunting is done traditionally as a pastime in this region. Each tribe of Nagaland has a distinct style of cooking.

Rice eaten with meat or vegetables is the everyday food of the Naga people. Dal is included along with the meat curries, but smoke dried pork curry with fermented soya beans and snails is a traditional Naga food.
Plain rice, vegetables like potato, and meat are the main ingredients used in the Naga cuisine. As Naga people are hunters, the meat also includes that of other animals such as dogs, cat, rats, birds, snakes, spiders, monkeys, bear, and even elephant. It is shocking to know that these Nagas use solidified animal blood, to prepare curries.
Apart from meat, bamboo shoots, lettuce, soyabeans, mustard leaves, and yam leaves are also used in cooking. The Naga tribes ferment their food, especially meat, in order to preserve it. The food is fermented by first boiling it and then putting it out in the sun . The fermented food is parceled with a banana leaf and stored next to the fire until further use.
With all this information on Naga Cuisine it seemed absolutely difficult to find a vegetarian recipe from this state. This is the only vegetarian recipe, I could search.It seems authentic, but at the same time I could be wrong. I was glad that Archana , my fellow blogger  had shared this link with some other friends, that surely was a relief.
Anyway lets get on to the recipe which is from here. 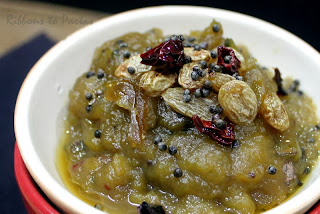 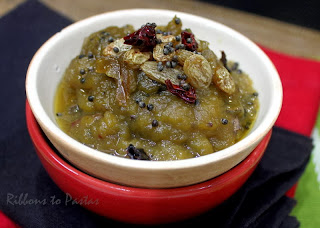 This was a chutney which had a nice pleasing taste, the mild sweetness of pumpkin was enhanced by jaggery and raisins.Tamarind gave it a litle tangy flavor which we all loved.