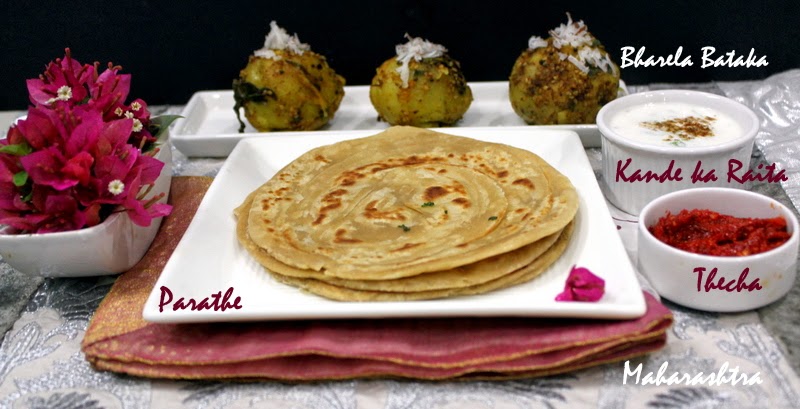 Maharashtra lies on the west coast of India and different parts of the state have very different types of dishes to offer. Even inside the state itself, one can find distinguishing flavours and food styles that make eating an interesting activity altogether. Maharashtrian cuisine is divided into two, Konkani, and Varadi. Though quite different, both use a lot of seafood and coconut.
Groundnut oil is predominantly used as a cooking medium. Tamarind and kokum are the souring agents that are used in this cuisine and the taste is often prominent in several recipes. Typically vegetarian dishes are flavoured with the very popular goda masala which is a mix of onions, garlic, ginger, chilli powder, green chillies and mustard. Another variant of vegetables dishes in Maharashtrian cuisine is characterized by the kaala masala, which is a black coloured spicy masala mix.
A typical lunch or dinner usually starts with poli (bread), accompanied by one or more bhajis (vegetables) and a koshimbir (salad) along with some accompaniment usually pickle. This is usually followed by a second course of varan (thick dal), aamti (sour dal) or rassa (curry) with rice. The plate served has a specific place for each food item served. I have enjoyed cooking a traditional Maharashtrian meal or rather a thali, you could check here.
Non vegetarian food is a very important part of traditional Maharashtrian cuisine. Chicken, mutton and eggs are prepared and eaten in several forms. Kombdi vada is a classic Marathi recipe from the malvani region of Maharashtra. A large part of Maharashtra lies on the coastline. The food in these cities and villages makes the coastal influence apparent. Seafood is eaten in plenty.
Ganpati Bapa Moriya – this joyous cry rents the air in the month of September when Maharashtrians go out to celebrate the birthday of their favorite God! The most delectable offerings during Ganesh Chaturthi are modaks, small rice or wheat flour dumplings stuffed with coconut and jaggery.
I have been to a few of the cities of this state and  of course nothing to beat Mumbai.
The city of dreams, the city of stars, city of bollywood..city of food!!
Five stars, seven star hotels, street food this city has so much to offer in terms of food.
The city is known for its distinctive street foods. Although street food is common all over India, street food in Mumbai is noted because people from all economic classes eat on the roadside almost round the clock . 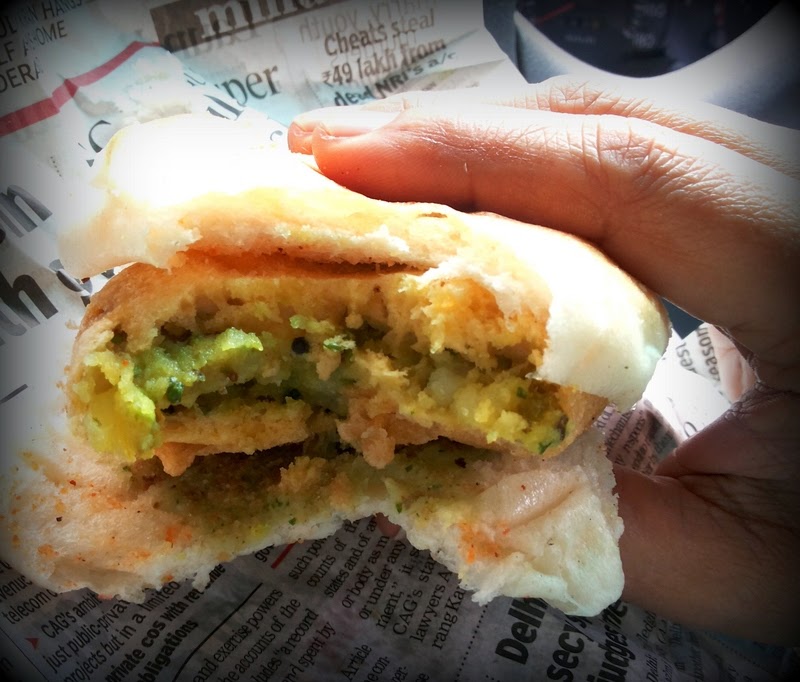 Vada Pav is noted as the most popular street food in Mumbai. Every visit to Mumbai means it has to start with Vada Pav and end with Vada Pav, a few packed ..for back home.  Panipuri, Bhelpuri, Sevpuri, Dahipuri, Sandwiches, Ragda-pattice, Pav Bhaji, Chinese bhel, idlis and dosas , the list is endless.  On my last visit I captured some pics, These amazed me and I would love to share them with you guys..excuse the quality as they are from a cell . Can you see these guys…making dosas, and it is unbelievable to read their menu card.They have enormous variety and strange combos, but all of them taste out of the world. Do not miss the Sandwizza, they had more than 25 varieties of sandwiches.
In terms of non-vegetarian offerings omlette pav, kebabs and fish are found on Mumbai streets. 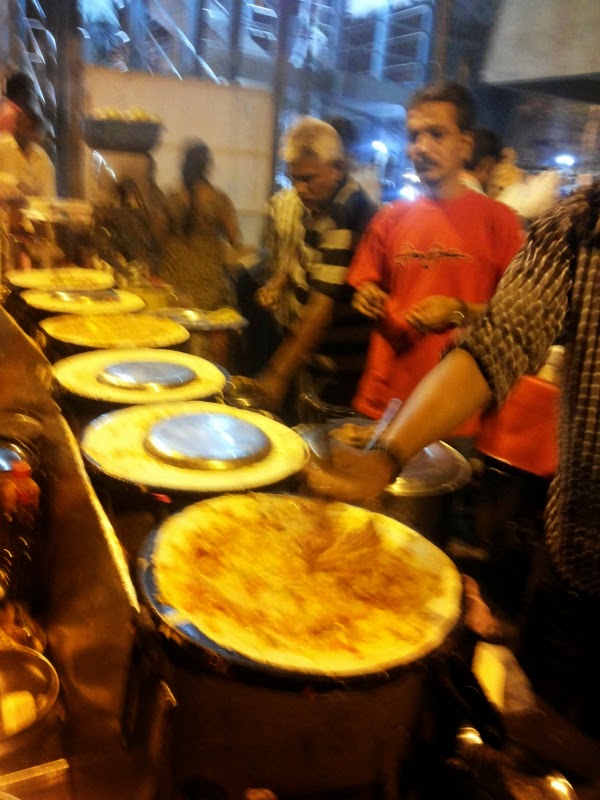 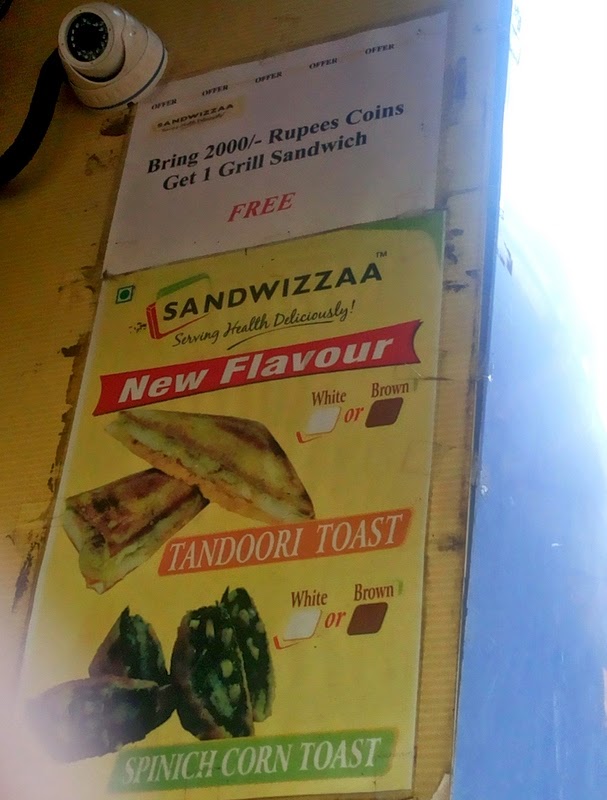 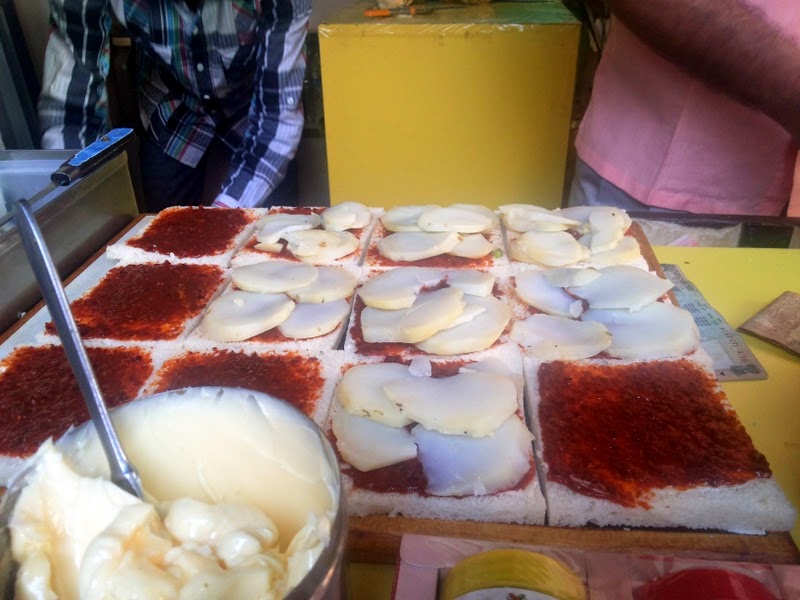 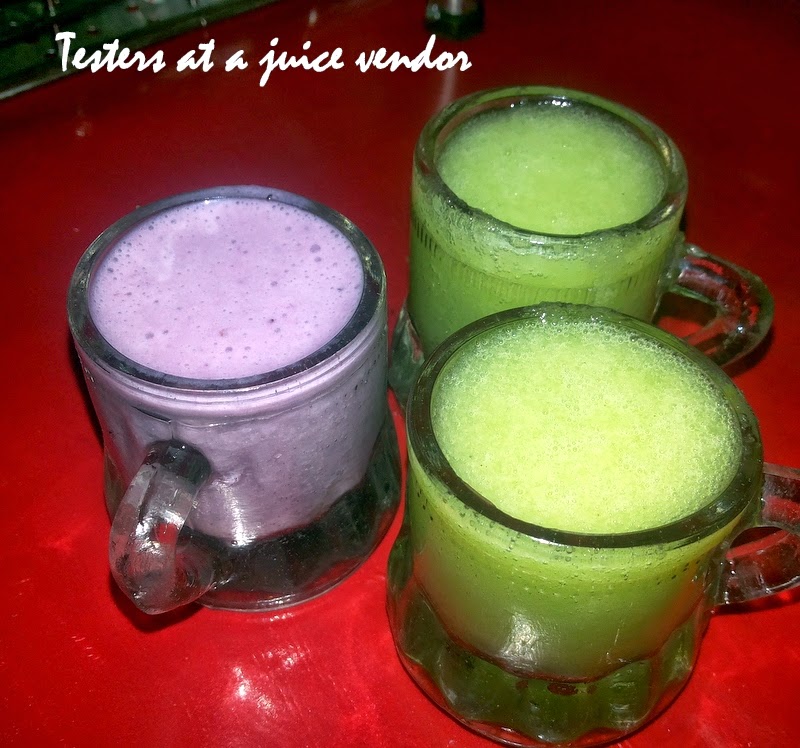 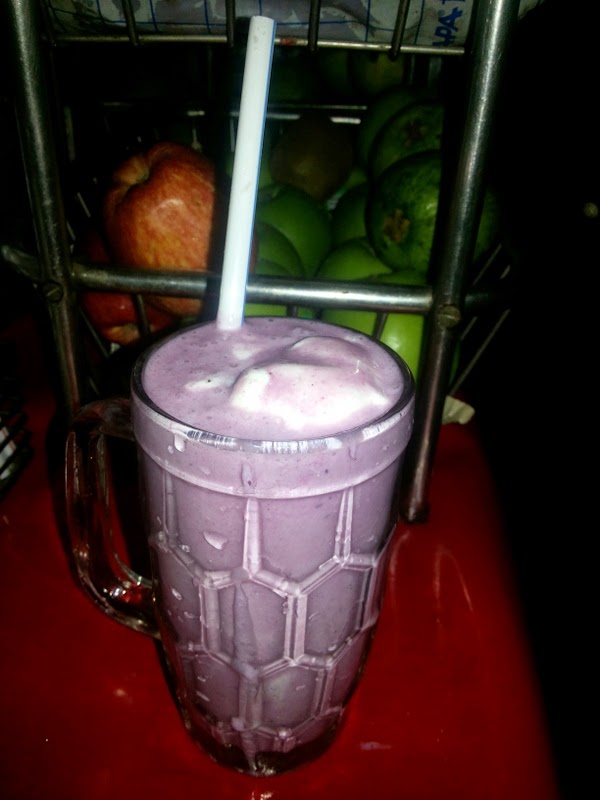 Kulfi and gola are among the desserts and coolants found on Mumbai streets. Apart from snacks, Mumbai has several juice and milkshake bars on the roadside that offer a variety of juices and milkshakes. Here are pics of a juice vendor who has more than 100 combinations to sell, he even gives you a tester..in a shot glass. What do you say to that?
Leaving the streets of Mumbai we move to Kolhapur. 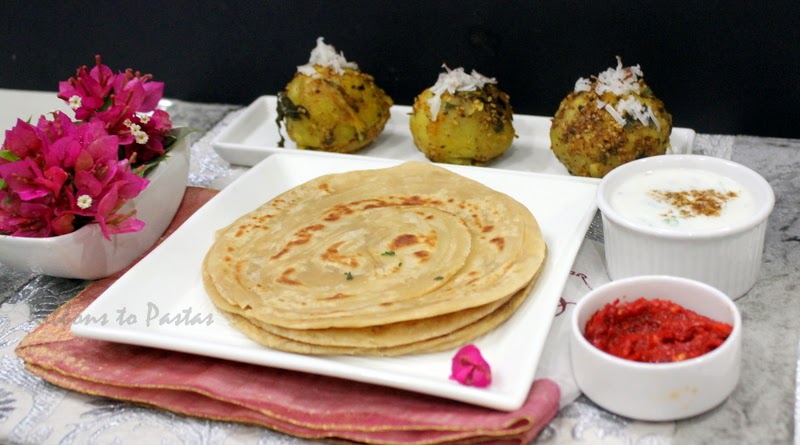 Kolhapur is well known paradise for non vegetarian lovers, but it has many eating options equally wonderful for vegetarian food. Missal and Usal Pav are the two main dishes from this place. And today I am cooking from Kolhapur. This is a recipe from my friend who is from there and we all these potatoes .These are served with simple Parathas , Thecha (which is a garlic chutney) along with Onion Raita. 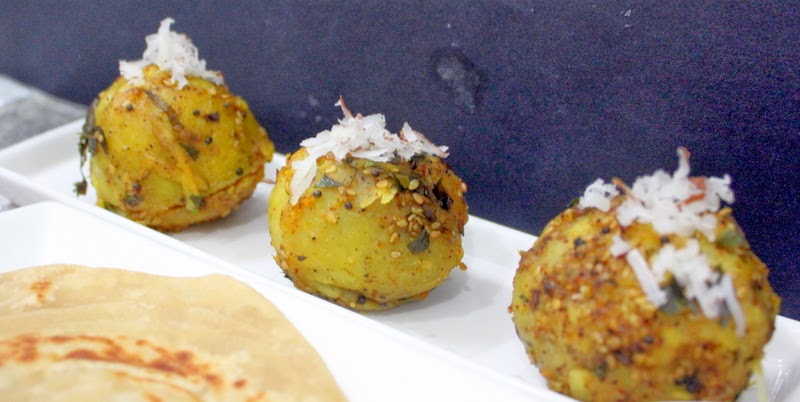 Bharela Batata
4-6 potatoes, boiled
Use medium sized potatoes.
Stuffing
4 tbsp grated coconut
2 tsps red chilly powder
1 tbsp jaggery
2 tbsp peanuts, coarsely ground
1-2 tsp sesame seeds
1/2 tsp poppy seeds
1 tsp onion, finely chopped
Coriander leaves, chopped
Salt to taste
Grind the above ingredients .
Boil the potatoes, chop a little head from the top, and scoop out the potato.
Save the head for closing back.
Stuff the above ground masala .
Heat a nonstick pan.
Add oil and a tbsp of sesame seeds place the stuffed potatoes, cover and cook, tossing and turning in between for even roasting.
Garnish with shredded coconut.
There is another version of Maharashtrian stuffed potatoes , which is a simpler version, but equally delicious. 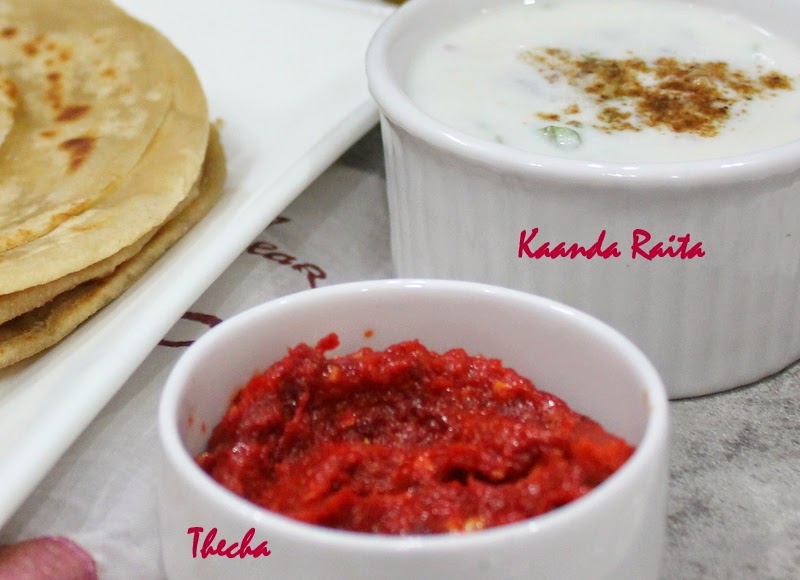 Kanda Raita
1 bowl beaten curd
2 onions, finely chopped
Salt to taste
Roasted cumin seed powder
Coriander leaves
Mix all ingredients with the beaten curd, chill and serve.
Red or Green chilly both can be used to pep up the curd.It is up to individual choice to choose from them.
Thecha
15 red chillies
4-5 pods garlic
2-3 tb sp oil
1/4 tsp mustard seeds
Pinch fenugreek powder
Pinch asafetida
Lemon juice
Salt to taste
Grind chillies and garlic in a mixer.
in a pan heat oil, add mustard seeds, fenugreek powder and asafetida.
Add the paste to this and cook till oil comes up.
Add salt and lemon juice. 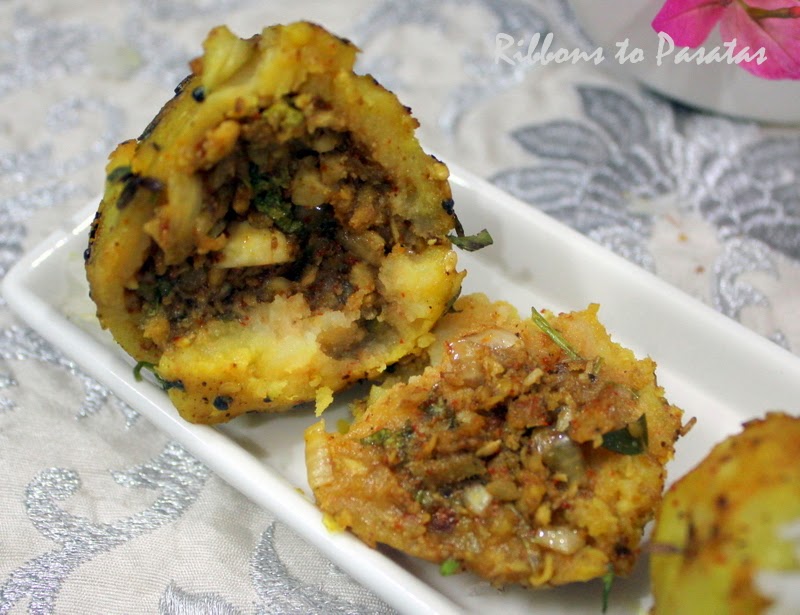 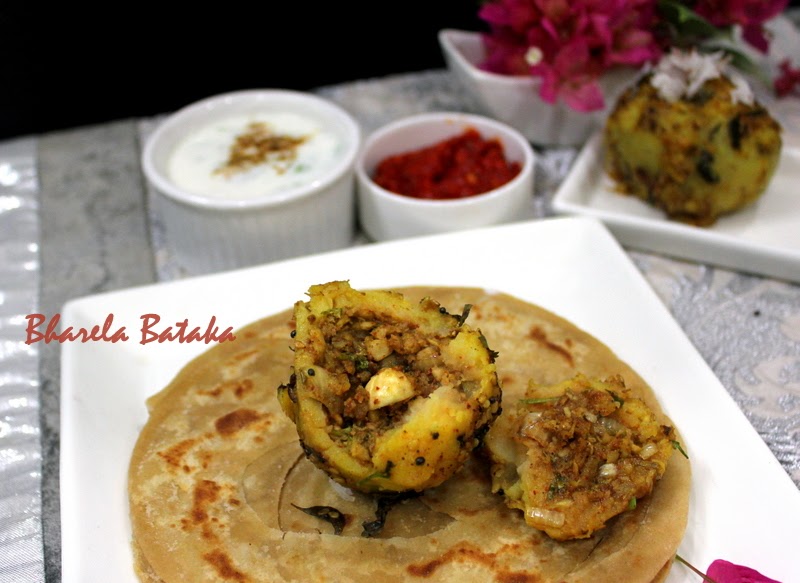